The next morning, it was finally time to start making my way back towards Texas, and just as I had arrived in Colorado with the chagrin of being in the mountains, I was now saddened by the thought of leaving such majestic beauty. Jeff led the way down Mt. Blanca Trail, and as we began to reach the base of the trail, Jeff’s usual antics (i.e. driving down the trail while standing on top of, and alongside, his Jeep) kept Ray and I entertained. From there, we drove towards Walsenburg, cordially said our goodbyes, and off I was back to Texas, reflecting on the excellent adventure I had enjoyed over my previous ten days in Colorado. 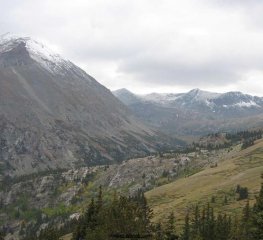 As the mountains vanished in my rear view mirror, I crossed into New Mexico and continued along towards Clayton and Dalhart. Along the way, I approached Capuline Volcano National Monument and decided to check it out. A hike to the crater provided insight into the volcano’s metamorphic presence, and as I left the park I could once again see the faint outline of mountains in the horizon to the west.

Once back on the road, the drive continued in routine fashion as I approached the Texas border. The amazing thing about this part of Texas is that it is completely flat, with the plains stretching as far as the eye can see. Remarkably though, Palo Duro Canyon ppears from out of nowhere and dominates the landscape. The park was a welcome rest stop for me, and as I found my way to the campsite, the only thing on my mind was my desperate need for a shower.

Back in Houston, the normalcy of my day to day routine commenced and I began to reflect on my innate desire for adventure. I concluded that there is value in seeking adventure and the parallels between what we seek and what we are truly bring us in tune with our surroundings. I also recognized that my journey to the Rocky Mountains took me to a place where both its vastness and beauty have lured me in much the same way that a magnet becomes drawn to metal: once placed together, it’s difficult to escape. I will always yearn for adventure, and that is why Aristotle’s wisdom will be as true to me tomorrow as it was in his time.

Adventure, in all its facets, is truly worthwhile.