As the week drew towards an end, Ray, Jeff, and I packed our bags and drove our Jeeps to southern Colorado for a final mountain excursion before my return to Texas. Our campsite was about twenty miles from Medano Pass, a scenic off-highway trail that passes through the Great Sand Dunes National Park and Preserve and takes approximately three hours to drive, and we fancied a good evening by talking about the old times and enjoying a warm campfire. 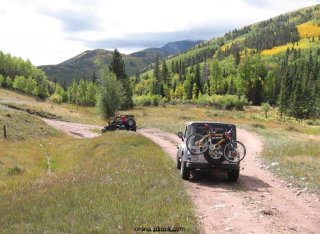 The next morning, we awoke to a crisp, clear day and began our trek towards Great Sand Dunes National Park and Preserve via Medano Pass. As we continued along Medano Pass and its moderate rocky terrain, we finally approached the backside entrance to Great Sand Dunes National Park and Preserve. Great Sand Dunes is a truly phenomenal place. Not only is the park the largest sand dune preserve in the United States, it is also home to a diverse and fragile ecosystem that was formed through an incredible process of wind and water erosion. Seeing the terrain change so drastically, from talus rock to fine sand, was a truly remarkable experience and driving through the loose sand was a blast!

Once at the park’s visitor center, we decided to take a break from our four-wheeling antics to hike the summit of the sand dunes. The sandy, soft terrain made it extra work with each step, and add to that the searing wind gusts blasting sand across your face and legs, and you’re left wondering if you’re in the mountains or in grating machine. In due time though, we approached the summit and admired the outlying views with the flat plains to the south and the Sangre de Cristo range, with its towering 14,000 foot peaks, to the north and east.

After a few pictures and time to reflect, we headed back to our Jeeps and began the ascent up Mt. Blanca Trail to prep our campsite. This was, by far, the most awesome and extreme off-highway trail that I have ever driven. Jeff’s YJ and my TJ Rubicon were truly in their element, grabbing slabs of rock and scoffing at the Earth’s attempts at slowing us down. In all seriousness though, this trail was so fun that it was actually scary in sections. A few spots actually gave the impression that our center of gravity wouldn’t be enough to keep us from toppling over but fortunately our trusty Jeeps did the job. 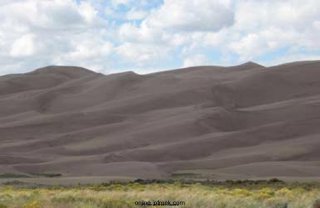 As we prodded forward, we reached a point that had finally forced us to turn around as it was too difficult for us to pass without destroying our vehicles. So we turned around and made way to a campsite that featured great views of the mountains, plenty of tree shelter from wind, and a fire that burned as brightly as the sun in the sky.