Struggling uphill on a bike follows the same principal as Newton’s Law: What goes up, must come down which meant the ride down this mountain was anything short of awesome! Winding down the trail, I made one small mistake and took a remarkable spill to the ground. It’s funny how ones misfortune can bring such joy to others as Jeff and Lynda shared a few laughs. Once at the bottom, we reached a single track trail head that was a true highlight of this trip. Single track is a term used to describe a trail that is only wide enough for one person or mountain biker at a time. It is the most popular type of mountain bike trail, and provides thrills similar to that of skiing or snowboarding.

The trail we arrived at was nestled along the eastern slope of one of Breckenridge’s protective mountains, between tall aspen and pine trees. The trail winded up, down, and all around for several miles at a slight decline which meant we practically floated through the trees, over tree stumps, and across rocky jumps that made me howl. Finally, after several more miles, we reached a crossroad, took a break, and continued through the twists and turns until we were back in town.

Once in town, we ate lunch and then stopped by several shops to check out the local clearances on summer gear. After strolling around town for awhile, we headed back to the Jeep just as it began to rain, loaded our bikes up, and began the journey back to Colorado Springs. 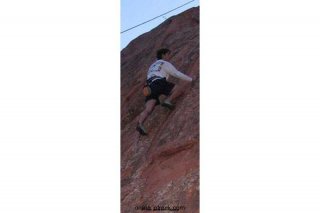 One of my true passions is rock climbing, and on my previous visit to Colorado Springs (nearly two years before) the open space at Red Rock Canyon had not yet been made available to the general public. Fortunately for fellow climbers and the citizens of Colorado Springs, Red Rock Canyon Open Space was unanimously accepted by the city government and a phenomenal continuation to the Garden of the Gods has a future to be enjoyed by all.

Rock climbing at Red Rock Canyon is unique as the formations are comprised of bright red sandstone that requires careful attention when choosing your next hand hold. I would later test this once I began my ascent of a one hundred foot vertical crag that Jeff provided belay on. Along my ascent, the peacefulness and focus that comes from rock climbing really began to set in, and as I climbed this fiery red wall of sand and dirt, my mind was at last free as if having entered into a virtual Elysium.

We spent several hours climbing, resetting several routes on Red Rock’s wondrous crags, until the daylight subsided and brought an end to our day. The crew would head out to Red Rock Canyon once more before my return to Texas, and again we would each continue to relish the freshness of the air, the grit of sand and dirt, and the focused attention to detail that rock climbing in the canyon would provide each of us.