The trail itself is breathtaking with views of the Front Range and surrounding canyons. Along the way, several challenges present themselves but overall, the trail was relatively moderate. Once at the summit, there were plenty of vistas overlooking Colorado Springs that served as great spots to take photos, admire the scenery, and devour a relaxing lunch. Being near tree line (the boundary at which tree growth subsides due to the elevation and cold) certainly made a difference in the temperature as the wind roared through relentlessly.

After lunch, the crew hiked to Mt. Baldy’s summit (a few hundred yards from the end of the trail), took in the fresh mountain air, and enjoyed the view of Pikes Peak to the north. The crew then headed back to the main trail along the top of a dam, took more photos, and enjoyed the second half of our four-wheel excursion.

The drive down Old Stage Road was just as entrancing as it was driving up. The rough terrain, the smell of aspen and pine, and the satisfaction of finally getting my Rubicon in the mountains had made this day worthwhile. Coupled with Jeff’s enthusiasm while operating the video camera, the drive down to the trail head provided thrills and plenty of laughs. In the end, the whole trip took about 5-6 hours and is one I highly recommend. 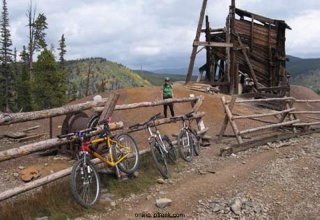 After having delighted in a fun-packed Saturday on the trails of Colorado Springs in our Jeeps, it was now time to hit the trails of Breckenridge on our mountain bikes.

Breckenridge is predominately a resort ski town located about two hours west of Colorado Springs and about an hour northeast of Buena Vista. The town is ensconced between the majesty of Quandary Peak and the Mosquito Range, and the thick aspen and pines along its north and east borders. Breckenridge is an awesome mountain town set in an area that is breathtaking in the early autumn months when the aspen trees begin to change their color. Aspens glisten along the slopes of the mountains, giving the impression that the mountains are on fire with their bright luminescence of yellow,  orange, and red leaves. It is quite an awesome sight.

When we finally arrived in Breckenridge, everything I had heard and seen was as expected. Breckenridge is a resort town that doesn’t necessarily feel like a resort town. Sure, the shops nestled along the Blue River certainly gave Breckenridge the presence of a resort town but the atmosphere and people made it feel more homely. Anyways, once we had arrived it meant one thing: unload so we could start biking in the mountains!

We started out by heading east of town along Wellington Road before reaching the French Gulch Road that continued for approximately three miles. After following a gradual incline to the main trail, we finally reached the top where we chanced upon the Sallie Berber Mine. All the old remnants of this long but forgotten mine laid testament to a history long past, and the shards of gold that had been left behind laid glistening against the dark background of dirt and rock and provided a sort-of light show that was pleasing to the senses. After enjoying the light show for a few minutes, we decided to get on our way.