Adventure #4:  Summiting Pikes Peak and Touring the Garden of the Gods

It was already mid-week and I was now fully acclimatized and ready for a real test of endurance and adventure. Unfortunately, I didn’t feel that climbing Pikes Peak alone while everyone else had to work would be a good idea. Because of this, I wound up doing the next best thing: summiting Pikes Peak via the Pikes Peak Highway. As a mountaineer and adventurer, this almost seems sacrilegious but it is one of the most scenic of drives and is something everyone should do at least once while visiting Colorado. 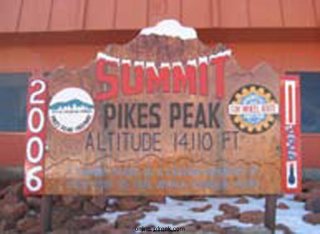 Pikes Peak Highway costs $10 but goes towards the good cause of maintaining the highway that stretches nineteen miles to 14,110 feet at the summit of Pikes Peak. Along the way, the aspen continued the trend of luminescence, providing an array of bright colors that would have lit the highway even at night. As the highway wound towards tree line, the road narrowed and became a little bumpy, but once at the summit, the views were so spectacular that the mountain truly lived up to its billing as ‘America’s Mountain’. Driving back down, one can’t help but be awe-struck by the beauty that is Colorado, and once I completed the two hour round trip drive, my sadness for not climbing the mountain was erased with the joy of having enjoyed the drive to its summit.

After the trek up Pikes Peak Highway, my next visit was to the Garden of the Gods. On previous trips, the Garden of the Gods has been a haven for the JPFreek crew to rock climb. On this trip, however, it was a chance for me to appreciate and tour the park as a spectator. Not only is the Garden of the Gods a magnificent study in Geology, it is also a remarkable testament to the Earth’s history and the role that this region has had in creating the ecosystem of today.

The grandest physical attraction at the Garden is Balanced Rock, arguably called the Eighth Wonder of the World and one of the world’s most photographed rocks. Balanced Rock got its name by its unique formation that gives the impression that the base, which is smaller than its top, is balancing the rock in its position. Other formations in the Garden include the Gateway Rocks, a natural occurring entrance to the park, and Cathedral Rock which provides some excellent single and multi-pitch free climbing. 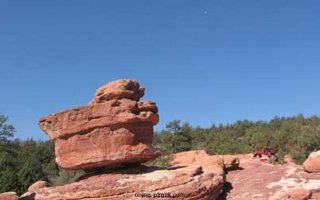 After my tour of the Garden concluded, it was off to Jeff and Lynda’s house for a nice, home cooked meal that included preparation of the largest zucchini I’ve ever seen! Their garden must be on steroids!