Few things are relished less than hopping in a car and traveling for seventeen plus hours, but when the trip is expressly to enjoy ten days of mountain bliss, adventure, and good times with friends and fellow ‘freeks’, a full day in the bucket seat of a TJ Rubicon makes it all worthwhile.

JPFreek’s first ‘official’ road trip had all the ingredients for a killer time: plenty of mountain biking, rock climbing, hiking, four wheeling, and overall adventure. As it turned out, the trip was beyond my expectations.

Seventeen hours and eleven hundred miles of terrain ranging from concrete structures to rolling hills to eventually arid deserts and finally mountainous precipices made for a long day. Having gotten sleepy between Austin and Lampasas, I took a short nap but once revived, the drive was clockwork and quite enjoyable until I reached the manure-stained air of Lubbock and West Texas. Yikes, what a rude awakening! Imagine yourself savoring a tasty bowl of cereal when all of a sudden the milk you’re drinking turns sour. For miles upon miles, I reflected on memories past as an undergrad at Texas Tech University, all the while suffocating on the insipid air en route to the Panhandle.

Just when it seemed like I was going to be permanently traumatized from asphyxiation, I approached the Texas-New Mexico border. From there, it wasn’t long before I had finally reached the border of Colorado and even though it was now dark and the mountains were no longer visible, their magnetism drew me in and let me know of their presence. Shortly thereafter, I was in Colorado Springs having accomplished the mission of day one: Arrive in Colorado. After a welcome greeting from Jeff ‘Jeep’ Haley and his wife, Lynda, it was time to hit the sack and recover for our upcoming weekend excursion. 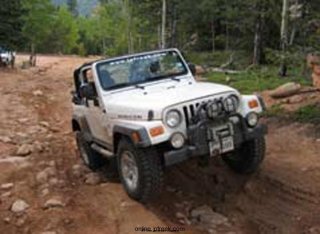 Originally, we had planned to climb Mt. Sneffels and Wetterhorn Peak, both located in the San Juan range, but had to cancel those plans due to inclement weather. Instead, we decided to spend Saturday enjoying a full-day of four wheel adventure along Old Stage Road just outside Colorado Springs. The trail, tricky in spots but overall pretty moderate, leads up to Mt. Baldy, a mountain appropriately named for its bare summit. Armed with two Jeeps and a video camera, the JPFreek crew along with their wives, traversed the breathtaking trail lined with aspen and pine trees. As Jeff would explain, Old Stage Road had once been a stagecoach road that had lead to/from the gold mines once abundant in this region. Now it serves as a four-wheel adventure haven with miles upon miles of trail and numerous side trails that offer both adventure and adrenaline rush.