It was a completely different world; trees, grass, lakes, wildlife, much cooler temperatures. The team stood on a high overlook and could see the blazing heat rising off the red rock desert below. They briefly felt good about not baking away in the heat of the valley.

This tour took the entire day. The Jeeps rolled along smoothly, up and down the beautiful peaks, without a worry. Dion and Derek’s Jeep had a heat issue, and Team Tennessee lost their 4×4 lever control; however, all problems were fixed on the trail in a few minutes. This was a beautiful trail, and they didn’t return until late at night. 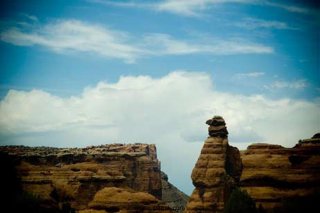 The next day was departure day. The team, sad to leave this beautiful desert, also looked forward to getting out of the heat. They headed east for Colorado, and this leg had been designated as their fourth personal challenge. The four challenges of the journey were:

Endure the heat exhausting climates of the Moab Desert in July. Completed.

Off they went. A two man endurance run, specifically designed to test the limits of the Jeep and the team. The point was to see if it could be done in preparation for the next big journey: the 2008 Great North Crossing from Halifax to Denali.

They occasionally switched duties through Colorado, Nebraska, and Illinois. Derek proved to be a driving machine during this journey as he handled the wheel more frequently than Dion, who could barely keep his eyes open. A little endurance training for him was definitely required.

Once in Michigan, they pushed on. They had only stopped once, in Nebraska for 2 hours. The rest of the time was spent driving straight through which was a true testament of endurance.

Late at night on the 20th of July, they arrived back home. They immediately noticed how much darker they were than everyone else, and how much red dust and dirt was affixed to almost everything they owned. They further noticed how many insects paid the ultimate price on their front bumper, en route to the team’s quest for endurance glory.