You are here :Home Jeep Adventure Climbing the Chimney in Colorado's San Juans

In the northwest San Juan Mountains, near the little town of Ridgeway, Colorado, resides a lonely tower. Chimney Rock (also sometimes called Chimney Peak) sits among great peaks and formations such as Courthouse Mountain, Precipice Peak, and the spires of Cimarron Ridge.

While driving up through the Cimarron Valley, Chimney Rock looms over the valley, guarding the entrance to Owl Creek Pass.  In 2004, Alan, Jackie, and climbing partner, Barry, first noticed this spectacular mountain and vowed to return and climb it. Now we would finally get our chance.

The road to Owl Creek Pass and the trailhead for Chimney Peak is a long dusty dirt road that our Grand Cherokee handled with ease. All three of us, including our camping and climbing gear, easily into the back of the Jeep and we parked next to the river to camp before our day of climbing the tower. Waking up early and on the approach, we bushwhacked and negotiated the nasty loose cliffs and ramparts below the base of the tower.

Most of this section had to be done solo and was a class 5 nightmare of loose rock and sand which took almost four hours to climb. At the base of the tower, I racked up and began leading the first pitch. Technically speaking, the rst pitch is probably the hardest, with a 10 ft overhanging and unprotected section of 5.6 to a ledge, then more 5.6 up and around a chock stone. After negotiating the overhang, I began moving towards the chock stone when I pulled off a loose hold and fell about 10-12 feet down to the ledge. Only Barry’s quick belay reaction and a .75 Camalot saved me from falling all the way to the ground. Laying there in agony while my sprained ankle swelled up and turned purple, it was apparent that my day was over; and we all knew it. 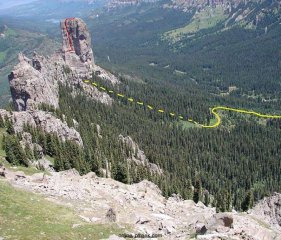 After being lowered, I insisted that Barry and Jackie finish the climb. So I lay there in pain for seven hours while they completed their summit bid, and then rappelled back to the ground. They reported that the climb was one of the worst of their career with long, unprotected run-out pitches of loose rock and a constant bowling alley of rockfall. They were totally exhausted and stressed out from climbing in those conditions, and they had completely run out of food and water.