Just as he dragged his feet to the Jeep, he felt a sudden rush of adrenalin and he knew this was his last chance to get himself into the Jeep where the cold water that he desperately needed was waiting. He took advantage of this and charged for the Jeep. Thankfully he made but it sure was close.

Close behind, Derek slowly trudged up, shirt off, sun hat on. He, too, was feeling the effects of the heat. They both agreed that it was too hot and dangerous for hiking anymore so they decided to hit a driving trail in the park. Shortly after entering this trail, the Jeep overheated violently. Smoke and steam rose from under the hood. The guys inspected it closely and noted the air conditioning clutch had burned out, and this was what had been causing the Jeep to overheat. It was so hot in the area that the air conditioning unit couldn’t keep up with creating enough cool air.

They turned in for the night. Tomorrow they would meet up with the other half of the team. 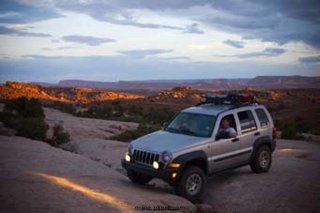 It is here that they met with Scott Cole and his Uncle, affectionately known as “The Boss.” They all met at the Moab Brewery the next day where they were well received. They discussed the heat and the problems Dion and Derek had encountered. Shocked and amazed, the new half of the team agreed that remaining local instead of attempting the long White Rim Canyon for three days was the safest idea.

That night the team headed for Long Valley Canyon. The drive was a cool, relaxing trip into a deep canyon where they saw wildlife and enjoyed the cool night air. It was a drastic change from the previous day but it wouldn’t last long. Day break came and the team headed for the famed Fins N Things trail. They loaded up their Liberties and headed out as the heat of the day continued to rise steadily.

At Fins N Things, they experienced a lot of rock climbs and descents; it was a fabulous trail. Dion once again started to slowly get the familiar feelings of heat exhaustion while he was out in the slick rocks spotting and guiding the Jeeps through the terrain, and repeatedly getting in and out of a Jeep with no air conditioning.

After a long, slow day on the trail, it was decided that the team could no longer continue the trail ahead. The heat was just too intense and was battering the team badly. They left via an emergency access road and headed for town. It was a long, hot day and they needed a cool break at the famed Moab Brewery. This had truly been a personal challenge of great magnitude at this point.

The next day was spent working on the Jeep while the Tennessee half of the team took a tour through Arches National Park. Later they all met up and headed out for the Klondike Bluffs trail. It started out hotter than anything, but as evening fell it cooled down. Here they drove over vast expanses of slick rock and looked at million year old dinosaur foot prints in the rock surface. It was an amazing and mind- expanding experience. After that, they drove back in the cool night air and enjoyed the evening.