Dion and Derek were at Moab for two days before meeting the other half of the team, and they decided to tour around the desert. They located some backcountry trails very quickly, as well as Arches National Park, and decided to try some of them out. They drove to Arches National Park with the air conditioning blowing full-blast and it was pretty hot at 45 degrees C. 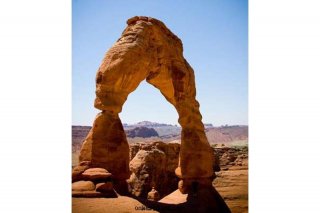 Once in the park, they climbed the first hill and almost immediately the Jeep began to overheat. They opened the windows, turned off the air conditioning, and turned on the dreaded heat to let the engine cool off. It worked and the temperature settled though the team was without air conditioning in the brutally rising heat.

They toured the park, and around 2pm they noticed the heat to be at its highest, touching around 55 – 58 degrees C. Incredible heat, just astounding! Neither of them had ever experienced these environmental extremes before. As they sat dumbfounded at how anything could survive or live in these conditions, a small rabbit hopped by.

Later in the day, the team drove to “Bull Canyon,“ an easy backcountry trail. However, with the rising heat, they ran into overheating problems deep in Bull Canyon trail. Trying to find shelter was near impossible as the heat was unrelenting and pounded down on the guys and the limping Jeep. Luckily they found some shade on a small sand dune under a wall of rock, and let the Jeep ® and themselves cool off. They slowly made their way out to their relief and headed for base camp. Tomorrow they would walk the harrowing “Delicate Arch“ hiking trail in Arches National Park.

Sunrise had arrived and the guys tended to the Jeep to ensure all was well. As it all seemed to be, and they didn’t want to be stranded in the desert again, they headed for Arches National Park to hike the Delicate Arch Trail. At the hiking trail they noticed a sign warning of people having to be rescued from this trail due to dehydration and heat exhaustion. Heeding this warning, the guys ensured they had plenty of water and headed off.

The initial climb was hell. The heat was around 55 degrees C and it reflected off the slick rock trail, making it even hotter. It was all uphill too, and they were gasping the hot desert air into their starved lungs. But eventually and happily, they made it to the impressively large Delicate Arch. There they took a break to relax and admire this creation of nature. They then decided to head back. 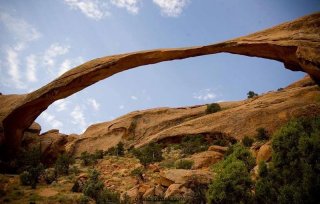 The hike back was more intense than the hike there. Dion began feeling the effects of heat exhaustion, and he began focusing on getting back to the Jeep. In the nearly 60 degree C heat, Dion was finding himself feeling confused and occasionally forgetting where he was, but he pushed on. He was definitely reaching an emergency status, and he knew it. He needed cool water. The water in his hip flask was hotter than a fresh cup of tea as the surrounding air had heated it up in no time. With every sip, he found his core temperature rising dangerously high. That warning at the trail head was no joke.