When the team made their way to Thunder Bay Ontario, it was pouring rain. Dion and Derek stopped to see the Terry Fox Memorial on the top of the hill above the city, and it was an incredible view of Thunder Bay, and an incredible memorial that was well worth the stop.

Come mid-afternoon, the team finally crossed the border from Ontario to Manitoba, and agreed that while they were far from home, they weren’t even halfway through the trip. Laughing about this, they stopped in the Manitoba Welcome Centre where Derek broke out some of his famous canned “Tirolska” meat from the food storage bin, and the guys laughed as they ate the heavily salted and seasoned meat. Afterwards, they were back on the road.

Winnipeg came quickly. What a beautiful City. The streets were clean and the people were friendly. The two agreed that it is a far cry from where they call home, where the people keep to themselves and the streets are always dirty. 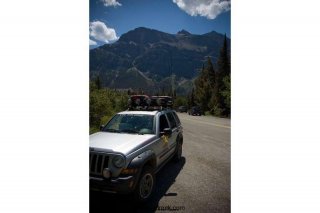 After a nineteen hour day on the road, the team agreed that they would stop outside of Winnipeg for the night and press for Saskatchewan the next day. Just before the team set up for the night, they caught a glimpse of the Northern Lights, otherwise known as Aurora Borealis. It was an amazing display of green and white ripples and waves of light.

Entering Saskatchewan, the scenery changed drastically and suddenly from low rolling hills and forests to sparse and flat terrain as they entered the Great Plains of central Canada. The team had some great weather as they drove through the province that claims it is the “Land of the Living Skies.” The guys agreed that it was appropriately named because the land was so flat it made the sky and the horizon seem vast and huge, and with the perfect skies that featured hints of puffy clouds, it certainly seemed to be alive and vibrant.

Driving through Regina Saskatchewan, the team suddenly lost GPS communication with the laptop system. They were blind as a bat with a navigation system that was less useful than a bag of wet hammers. They had to stop.

Proud of being a day and a half ahead of schedule, they were confident they could use the time to repair the GPS. Two hours went by and the GPS was fixed. Relieved to be back “online,” the team ventured forward.

The next day, the team entered the much anticipated Province of Alberta and began noticing the landscape had become hillier and less flat. It took the entire day, but it was well worth the time as they drove through the beautiful province and then reached Lethbridge, the pivot point where the team would go from west to going south. Stoked with anticipation of traveling south along the Continental Divide, the team stayed in Lethbridge that night and performed a few minor checks of the Jeep and equipment, and sat on a park bench with the sunset while eating from a couple of cans of the aforementioned famous “Tirolska.”

Sunrise came quickly, and with excited anticipation the team jumped out of bed and hit the Jeep. A quick GPS check and they were on their way to the border at Montana.