Anyone being deported gets taken to a holding facility where the Agency takes fingerprints and photos of each person. Men, women, and juveniles get separated and locked into secured areas, and usually they will be on a bus back to Mexico within a few hours.  Those who are not from Mexico or are being held for a hearing in front of a judge are the exception.

On the way back to the office, we pulled over on northbound I-19 where a Border Patrol car had stopped.  Two agents stood by a red Cadillac and relayed to King and Gumtow that they’d just caught two smugglers.

“They tried to run, but they didn’t know there were two of us.  They didn’t get far.” 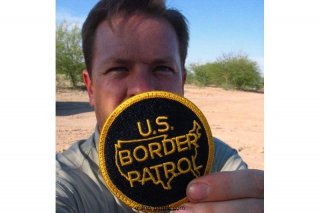 “Come here, check this out,” Gumtow motioned to me.  We crawled on the ground under the Cadillac.  “See these spacers on the suspension? They do that to make the car ride at the normal level when they’re fully loaded
with contraband.” He stood up, paused, adjusted his sunglasses and then mused, “We still catch ‘em though.”

There you have it: a day in the life of a Border Patrol Agent. Still want to drive a Jeep for a living?

* Tucson Sector is the busiest of all Border Patrol. Facts & Figures of the Tuscon Sector:

Sector guards 262 miles of the U.S. Border, which is only 0.04% of all land borders. 2700 agents intercept 36% of all illegal immigrant traffic and seize 46% of all smuggled marijuana..
Of the arrested immigrants: