“This could get interesting.”

He drove us down the hill parallel to the wall, into the wash and up the other side.  No incident; “Damn,” I thought. The Border Patrol typically uses vehicles they call “War Wagons” for this section.  With protective steel grating wrapped around the windows, you’ll know where this nickname comes from. They appear to be remnants from a Mad Max movie. When the rocks start  flying the agents stay protected, albeit  the stones slamming into their rig are unnerving.

Here’s the deal with the wall at Nogales: it ends just a short distance outside of the town and then continues as a barbed wire fence and short steel barricades – the barricades a recent addition, courtesy of the National Guard. “That’s all we got for a border out here,” they told me.

When I asked about the logic of a brick-n-mortar wall along the entire length of the border, they just laughed at me.

“First, there’s a reason why this wall just ends beyond the city. It’s not designed to stop people from crossing. It’s designed to slow them down or get them away from the population.  Nogales, Arizona is primarily a legal Mexican-descendant population. If someone without authorization to be in the country can cross the border in town and blend in with the population, we’ll never catch them.  So we want the wall to force them away from the city where we have a better chance at spotting and catching them. Otherwise, they could just duck into the back door of a market or store and blend right in.”

I had never thought about that before, but it makes sense. He continued on, “Second, there are some problems with the existing wall, which shows why a full length wall will never work, no matter how tall or thick.”

The topography around Nogales is mountainous with steep hills and desert washes. King brought the Jeep to a stop in front of a section of the steel wall that spanned a wash.  What I saw of this wall was simply toppled over and utterly destroyed. 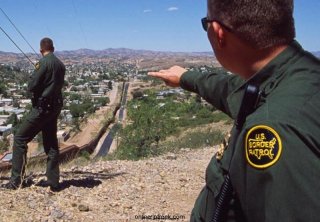 “See that?  Any time it rains, this wash fills up with water and the current plows that part of the wall down. We’ve got to come out here, patch it up, and then do it all over again after each storm.  Guess what?  That means we’ve got fewer agents in the field doing their job. The terrain around here just doesn’t work well for a wall.”

King then pointed at a camera tower reaching into the air 50 yards away.