It’s your only choice, but not everybody can do it.  It’s a great job, but it’s not easy.”

I st met Agents Sean King and Robert Gumtow at the Tucson Border Patrol Office. While signing a waiver – an easy little thing that says if I get maimed or killed today, I promise not to hold it against Uncle Sam.  “Before I sign,” I thought, “I want to see the Jeep.”  Then Agent Gumtow handed me two pictures. “This is one of our Jeeps from the Casa Grande office. It’s pretty nice.” Looking at the st photo, I noticed the typical stuff: mods. It was a white TJ Sport with no suspension lift, 31” Goodyear M/TR tires, some heavy skid plates, the standard green Border Patrol stripe running down the side, and the dark blue and gold emblem on the door. “Here’s the same Jeep two weeks later,” Gumtow coolly told me while revealing the next photo, scratching his nose like it was no big deal. 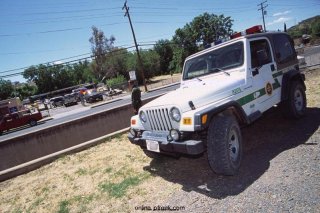 The Jeep was entirely smashed. The passenger side tire folded like a taco, hood crushed, windshield destroyed, doors gone, and otherwise unrecognizable. I must have established myself as the type of guy who could take a joke.  So I bottle fed them a line: “What’s this? Just another day at the office?  Brutal job, man.”

“Still want to sign the waiver?”  One quipped back.

After chortling for a moment, King explained that an agent had been using this Jeep in pursuit of another vehicle but the transfer case skid plate snagged on a railroad track when he tried to cross it.  A few minutes later, a train came along. Luckily the agent escaped before the Southern Pacific iron horse plowed through, but he had to sacrifice the Jeep. Odd how they showed this to me as I signed a Hold Harmless Agreement.  Nevertheless, I was anticipating an adventurous day in the desert and seeing some first hand apprehensions. And it wasn’t long after we arrived in the border town of Nogales, Arizona when we heard on the radio that a group of people breached the border in a yellow van and a passenger car of some kind.

Being in the very sector where they caught 392,000 illegal immigrants in fiscal 2005, I figured the odds of were pretty good of observing these guys do their job – an average of over 1000 arrests a day, just in this area.  To get a feel for the territory, they drove me along the existing steel wall that divides Nogales by two countries. Only ten feet away from the road and on the other side of a tall steel wall topped with rusty barbed wire: Mexico.

A team of agents stood on a hill as we passed by and one warned Agent King, “They’re throwing rocks over the wall down at the bottom of the wash.  Be careful.”

King then sarcastically reaffirmed me: