You are here :Home The Campfire What Is The Future of Fuel?

Efforts to spurn the use of alternative energies have built up an enormous amount of momentum lately.  Consumer advocacy groups, environmental organizations, automobile manufacturers, and everyday citizens have verbalized the necessity to move towards more renewable and sustainable alternative sources of energy. Ford Motor Company recently announced that it has begun production of a V-10, 6.8-liter hydrogen-fueled engine whose purpose is to provide maximum power and efficiency through a renewable and environmentally-friendly source. Other companies, including Shell Oil, also recently announced its equity stake in an Ottawa-based company named Iogen, a world-leading bioethanol company. Other numerous efforts are underway to strengthen the biofuel industry, an industry first created over a century ago in the early days of Henry Ford and his ‘Model T’. 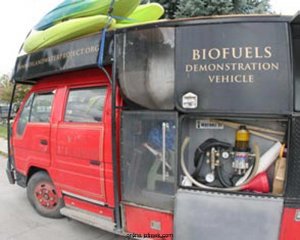 Of those efforts, one very notable endeavor was formed through the Biofuels Education Coalition (BEC).  The BEC was created as a voice to promote the use of biofuels and alternative energy.  Biofuels, in essence, are renewable fuels that are produced from vegetable derivatives such as corn, sugar, or vegetable oil and provide an environmentally-friendly alternative to more pollutant forms of fuel such as gasoline and diesel.  Under the auspice of the BEC, a unique and exciting six leg world-wide tour called the Oil + Water Project was established by two brotherly kayakers whose passion for life on the water was combined with a strong desire to motivate and educate youth about the future of alternative sources of energy. The project features a demonstration vehicle that is completely self-sustaining, fueled entirely by vegetables and non-petroleum products with all the necessary equipment on-board to process locally grown crops into vegetable oil and biodiesel fuel.

The Oil + Water Project was undertaken with a goal of ‘grass roots’ bio-fuel education.  The traveling team for the project is comprised of Seth Warren and Tyler Brandt, whose efforts began via a National Awareness Tour in Steamboat, Colorado in late March 2006, then spanned northeast to New Hampshire before turning back and completing in Seattle, Washington.  Both Seth and Tyler’s excitement about the future of biofuels and alternative energy, as well as their life-long passion for kayaking, have become complimentary assets for them as they then began the first leg of their sixteen thousand mile, sixteen country journey across North and South America in their ‘veggie mobile’.  Along their journey, Seth and Tyler will focus on exhibiting how the use of biofuels can reduce reliance on international sources of oil, as well as assist local environmental and conservation efforts.  In addition, presentations directed towards youth in garnering interest in biofuel issues such as crop production, technological ability, and the economic and environmental advantages of using said forms of energy, are a mainstay in helping to develop and inform the decision makers of tomorrow with the issues of today.