JPF: The Commander and Wrangler conversions appear to have been built specifically for the challenges of the Arctic Expedition. Have there been other conversion projects built for specific expeditions or is this a glimpse into the future of AEV projects?

AEV: One thing you’ll start seeing from AEV in the future, is more of the vehicles out in their element. Not necessarily the places that are shot all the time like Moab, Tellico and the Hammers, mostly in areas like the Northwest Territories in Canada, South America, and Siberia. As well, you’re going to see a change in the parts we produce. We’re aiming more at the customer who is looking to use the Jeep as a tool to access remote areas, more than an activity by itself. We’ve always looked at the normal OHV areas as good training, but if you can’t count on your vehicle to drive to the areas you want to explore and get you home safely, you might as well buy some quads. A Jeep that has to be on a trailer makes no sense to me, a dirt bike will out perform it any day off road. The new AEV Highline fender kit is a great example of our new product mentality. It allows you to run the big tires, while still keeping it low and stable on and off road. It also keeps the frontal area down, improving mileage for when you’re on road. The fact that we’re doing it in steel with new flares is because we know it will be like an OE part in terms of finish, durability and function. 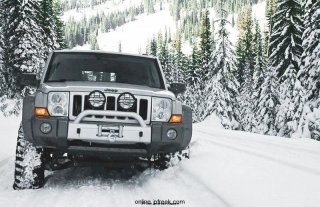 JPF: Will the Expedition door on the Wrangler conversion be an option available to the public?

AEV: The World Door was never intended to be a saleable item. It was done just to set the Iceland Jeep off a little more from the norm. The door pretty much negates the convertible feature of the Jeep, so I don’t think it would go over that well as a product. We figured we wouldn’t be taking the top down in Iceland.

JPF: Are there any current plans in the works for future expeditions?

AEV: We’re working on some, but right now we want to see how the Iceland Expedition goes. Setting these things up is a huge expense in terms of time.

JPF: There are some intriguing new Jeep production vehicles to be released this year. Does AEV have their eye on the Patriot or Compass for conversion projects?

AEV: The JK Wrangler will be huge for AEV, there is a ton of aftermarket opportunity for that vehicle. As for the Patriot or Compass, no plans yet, I don’t think the new Jeeps really work with our customer base. We’ll see what the interest is like when they are released, but I don’t think we’ve had a single inquiry yet.

JPF: Where can the public see AEV vehicles up close and personal in the near future?

AEV: Moab EJS is always a great place to see the vehicles up close. We normally arrange to deliver customer cars there, so typically we’ll load up two large semi truck car haulers and have about 20 new vehicles down there. We set up a small booth and everyone is available to talk to. Its really nice for us to get out and meet customers and prospective customers and not have the phone ringing every two seconds.