The Build – No Sleep For Three Weeks

This year AEV received the Commander three weeks before SEMA. At the same time, AEV was informed, there needed to be a Wrangler Unlimited ready as well. For the Wrangler, AEV literally went out back and picked out a frame and body…and started assembling the vehicle quickly. 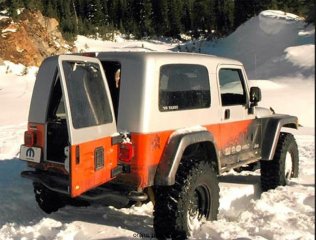 To add to the confusion, there was a three person camera crew following every move of the AEV team, documenting for cable TV, what goes on all around the country every year before SEMA. AEV knew what the plan was for the Commander and the Wrangler, but its still a lot of work in a short period of time. Everything but the Commander suspension and the fabrication of the Wrangler hood and fenders was done in house. The Flares and the rear door on the Wrangler took the most amount of time, as AEV had to design and surface (actually generating the math data for the cnc mill) those very complicated parts in a very small amount of time. The cnc mill was running for about two weeks straight, allowing about two days to build and paint the fiberglass parts. The flares on the TJ and the XK were painted at about 2am the morning AEV left for SEMA (at 7am). 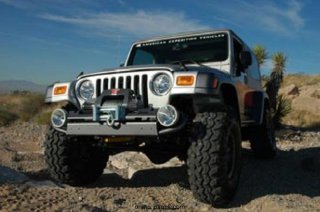 Body modifications: AEV Highline fender kit. The kit consists of new steel fenders, steel hood with AEV’s heat reduction features, and new fender flares. The fenders are raised ~3”, the hood is shortened 3”, the front wheel opening is stretched backwards 2” and the Fender flares are 3” taller, 2” longer, and 1.5” wider than Rubicon flares. The rear door is a one pc expedition style rear door, intended to make it easier and faster to access the rear of the vehicle. Since this vehicle’s intended use is for long trips in cold weather, the removable top feature wasn’t a concern.