You are here :Home Jeep Adventure Tip Top and Beyond 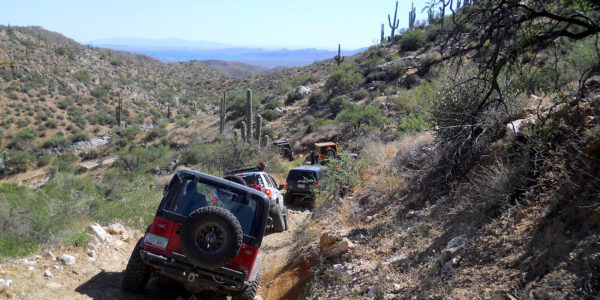 Last weekend my husband George and I went on a day trip with our 4×4 club, Offroad Passport, to Tip Top Mine near Phoenix, AZ. After checking out the mining sites and eating lunch, we decided rather than returning through the Table Mesa trail system, that we’d continue west to see if we could exit near Lake Pleasant. Our quest was ultimately granted, and boy were we in for a treat – and a trick! And it wasn’t even Halloween!

Eight Jeeps showed up for the adventure. We met on the outskirts of town and drove north in caravan on the interstate to the Table Mesa Road exit. We entered the Table Mesa Trail system on the west side of I-17, aired down, and then drove north by northwestward on trail 99999 (which was quickly dubbed 9 to the infinity over the CB). A trail closure at Moore Gulch stopped us, so we and had to backtrack to 99998 where we re-grouped, and took off again. 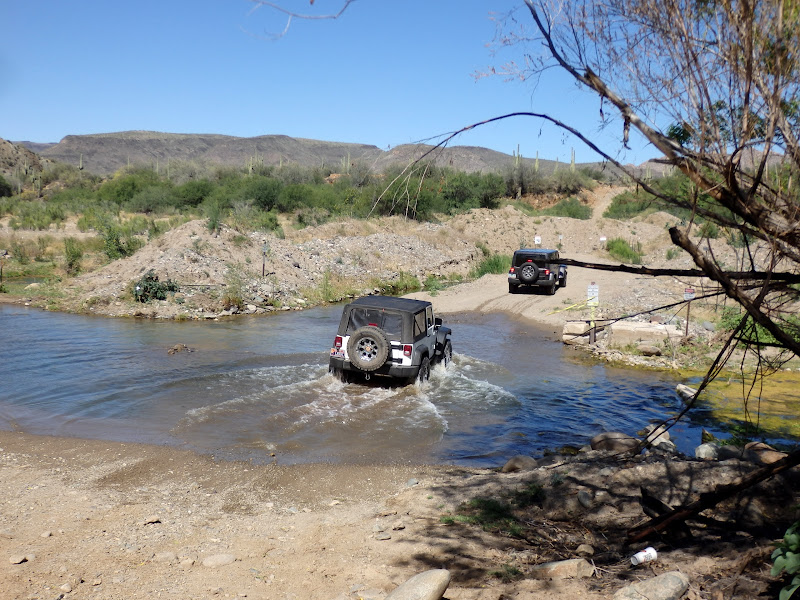 We crossed the Agua Fria River, then immediately passed the big mound of dirt where 9∞ would have come through. A short distance further on the wide grated dirt road, we took a detour to a Indian Fort on a nearby hill overlooking Cottonwood Gulch and the Agua Fria River. Rock walls are standing all along the perimeter of this lone rocky toe where Indians back in the day could see, but not be seen. 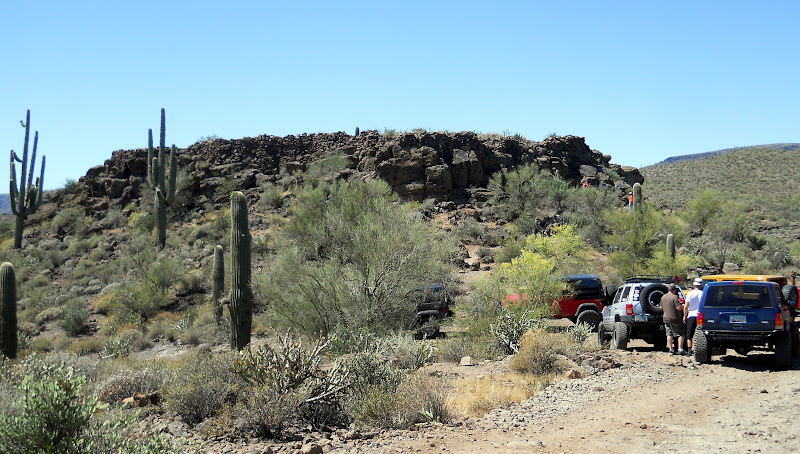 From there we headed for Tip Top Mine on the well-used graded road going up into the hills. The trail turned, following Boulder Creek and then Cottonwood Creek. Still a easy-going trail, we encountered occasional mild ledges and rocky creek crossings. As we drove alongside the creeks we marveled at the natural beauty; these rocky canyons were both very lush with lots of green foliage and huge saguaro cacti. By the time we got to Tip Top Mine it was 1:15 so we ate lunch next to a crumbling stone structure. Afterward some of the group went to check out the remains of the mine while others relaxed in the shade. 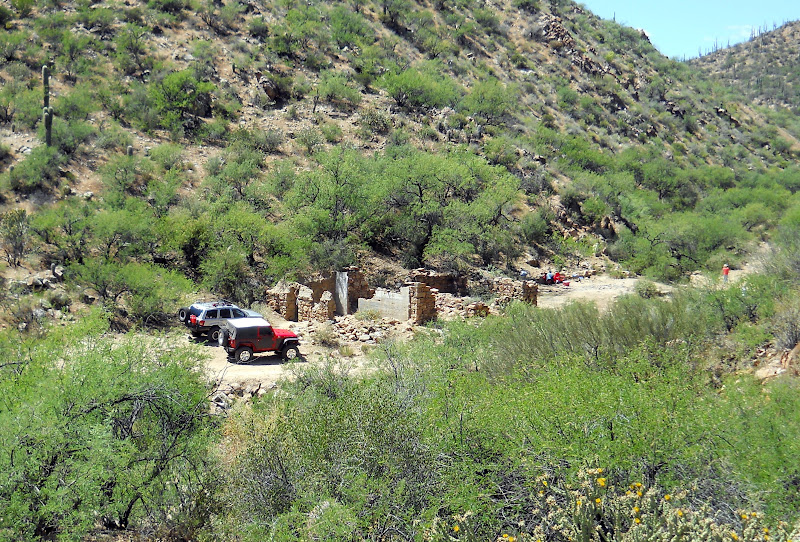 When everyone returned to the Jeeps, we talked about our options. We had already come 16 miles, which on the map looked to be about halfway to Cow Creek Road (the main trail from Lake Pleasant to Crown King in the nearby Bradshaw Mountains). Should we continue in the same direction past Tip Top and try to exit by the lake? Everybody was up for an adventure, so westward-ho! Right away we came to a metal building with a corral at a major fork in the road. Signs on the building told us we were being recorded on surveillance cameras as we tried to decide which fork we should take. Aerial photo maps showed going straight ahead looked like the most used trail, but it also looked like a dead-end. Going north, to our right, looked like a well used trial too, that possibly connects with the main road somewhere near Cleater, AZ. The one to the south, on our left looked the least traveled, but it looked like the shortest distance to pavement, and a lot closer to home. Still feeling adventurous, we all chose to go left.

We started up the side of a hill on a narrow and sometimes off-camber shelf road. George figured we’d get to a small mining operation, the road would end, and we’d have to turn around. We came to some switchbacks near the top, one with a[n] iffy washout that got our attention, before passing through a gate near the summit. From there the road went down into a wide canyon, and what a treat it was to be in full view of Lake Pleasant! This trail obviously saw very little traffic, but it was certainly a scenic route, and it appeared to go through! 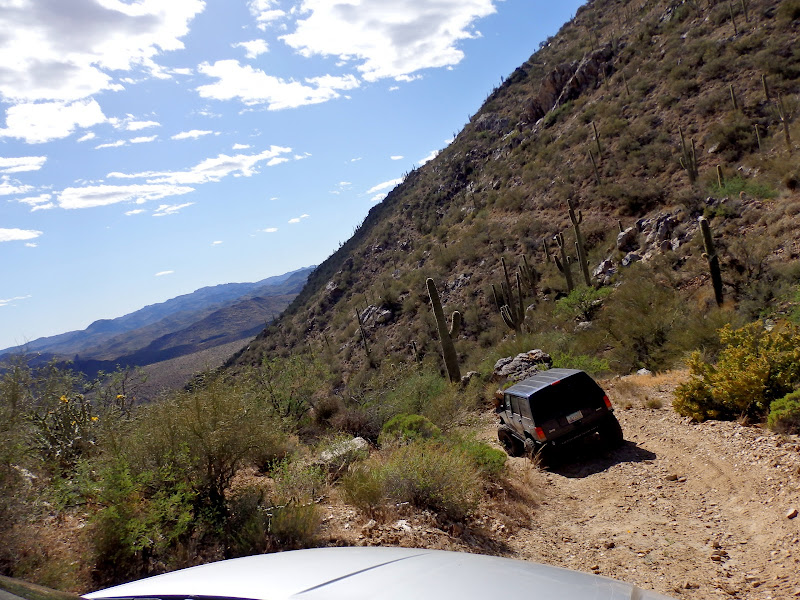 A majestic saguaro forest grew on the hillsides overlooking our eight full-size Jeeps slowly making their way down the rocky rutted track. It was slow going as parts of the trail were fairly overgrown and technically challenging. Several obstacles would be super tricky if we had to come back this way. 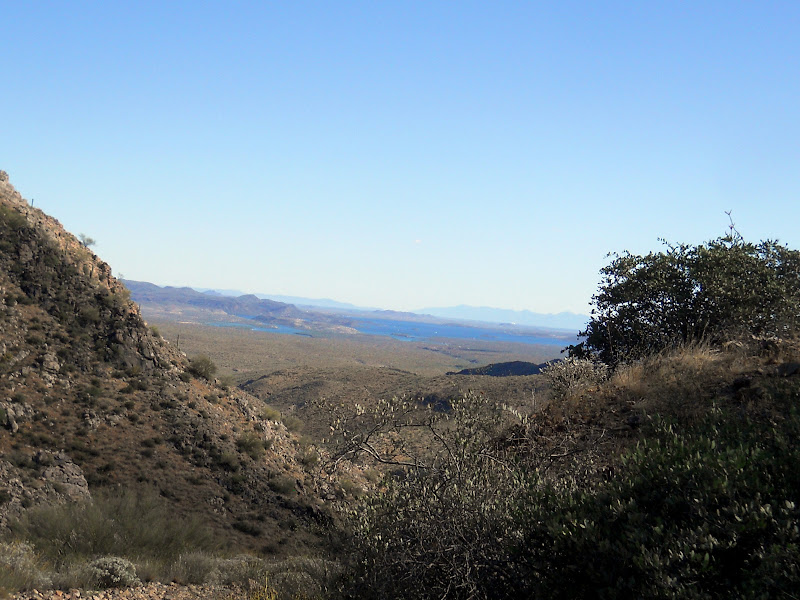 Eventually we could see a network of dirt roads and a few buildings here and there in the valley below. Shadows were getting longer by the time we came out the other side onto a graded road seemingly headed the same way we were. We were euphoric when we passed a ‘BLM Route’ sign, glad our instincts were right. But then we come to a locked gate with a ‘NO TRESPASSING’ sign. We turned around and tried a different trail and came to another gate with a ‘PRIVATE PROPERTY’ sign. Finally we split up the group, smaller groups all trying different passages in a labyrinth, searching for a way out.

On the trail George and I took, there was a hand-painted sign on the fence next to a cattle-guard: ‘Private Property – No Outlet’. But it was the only trail we’d found thus far without a gate. I was afraid we were going to drive into some homesteader’s backyard, but it was the only way. So we bravely drove over the cattle-guard, and further in to check it out while the others waited. 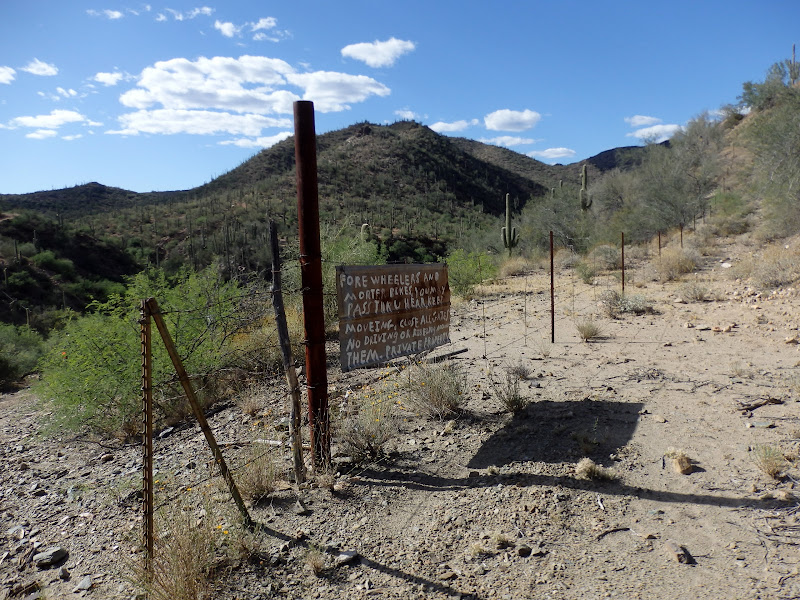 There was a house on the hill across a wide wash from us. We we could see tire-tracks through the wash that connected with a graded road outside the fence surrounding the property, but we couldn’t tell if the road went past the driveway. With trepidation and me constantly watching the house, we drove over there and then onto the graded road. Nobody came out of the house, and the road continued past the fenced property and around the corner.

We went up a hill on the other side of the house to get a vantage point. We could see the Cow Creek Road and a lesser trail at the bottom of the hill that connected to it. We radioed back to the group to come on, and soon we found that grid of graded roads and found our way out. We drove down the hill to the air-up spot just as the moon was rising. 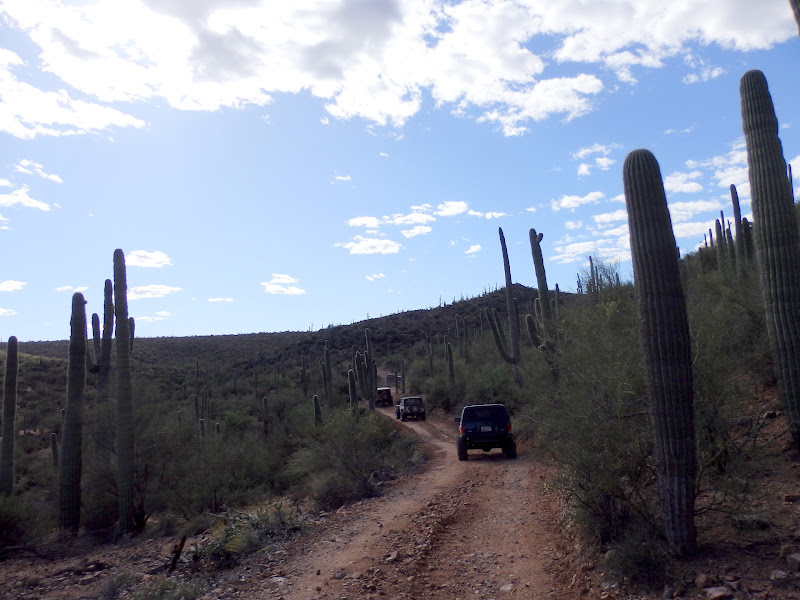 Having broken one of my own rules – I hadn’t packed emergency food – I was extra relieved we didn’t have to backtrack up that rocky slope! I can understand why somebody wouldn’t want ATV’s, motorcycles or 4×4’s stirring up dust driving past their house, but the ‘Private Property – No Outlet’ sign was a trick that could potentially have resulted in tragedy. What if we were alone and not brave enough to approach the house? And alone, we had turned around and gone back, but couldn’t make it up the steep, rocky terrain in the dark? Reflecting on all that could have gone wrong if we were wheeling alone reinforced my appreciation for my 4×4 club. We’ve got each others’ backs, we made it through together, and that’s what made it an adventure. 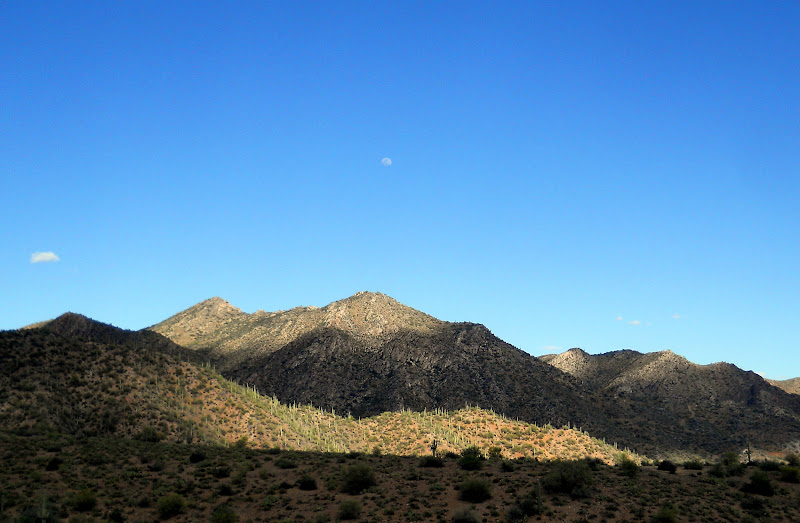 Contributing Editor: Diane has been involved in the Arizona Jeep Community for about 10 years, since buying her first Jeep, a 2001 Cherokee. She is a co-founder and trail-leader at Offroadpassport.com. Expedition travel became her passion about 4 years ago; she’s co-led trips ranging from the Devil’s Highway to The Rubicon. A member of numerous Jeep clubs in Arizona and California, she is a regular participant in multiple annual events such as public lands clean-ups and game and fish expos, and is well known for her trip reports at www.OffroadPassport.com and other local OHV forums.

« Why be a Rebelle?
Transamerican Auto Parts to be Acquired by Polaris »