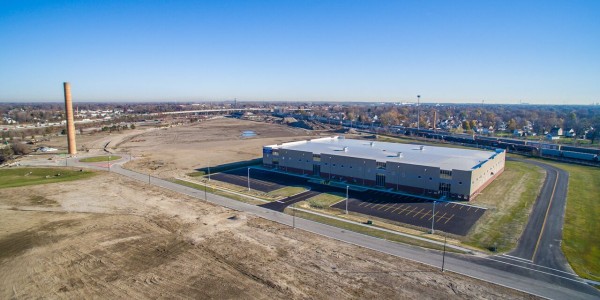 Site in Toledo, Ohio, Once Home to Original Jeep® Plant

Filed under “Well, that seems fitting” Dana Holding Corporation has announced that it will open a new high-tech axle manufacturing facility in Toledo, Ohio on the site that was previously home to Willys-Overland Motors.

The site has been cleared of the original factory buildings with the exception of the smokestack that proudly displays “OVERLAND,” which will remain. The Toledo-Lucas County Port Authority, who owns the property, started remediation efforts in 2013 to establish the aptly named Overland Industrial Park. It is located less than three miles from FCA US LLC’s Toledo Assembly Complex and Dana is the first tenant.

Dana plans to expand a recently constructed 100,000 square foot facility on the property to nearly 300,000 square feet. Over the next few years, the company plans to invest approximately $70 million and employ more than 300 associates by 2020.

“Dana has remained committed to metropolitan Toledo, its home for nearly 90 years. In 2015, we strengthened our commitment to the area by consolidating numerous satellite offices in the region into our expanded World Headquarters and Technology Center in Maumee,” said James Kamsickas, Dana president and CEO. “The investment in this new manufacturing facility is another substantial example of Dana’s commitment to the city and our community. It is an honor for Dana to return manufacturing to the same historic site where Toledo’s automotive industry began more than 100 years ago.”

In addition to its longstanding partnership with the Jeep brand, the expanded Toledo facility will support axle assembly for another global automaker.

Beginning in late 2017, Dana plans to assemble enhanced versions of its industry-recognized Dana 30™ and Dana 44™ axles, which will deliver increased power density and performance in a smaller package. Future axle programs and assembly lines are also possible.

To support this investment, Dana received financial and other assistance from the State of Ohio and JobsOhio, the Regional Growth Partnership, Lucas County, the City of Toledo, the Port Authority, and First Energy. Dana’s decision to locate the new facility in Toledo is subject to the formal approvals of financial incentives by state and local entities, which are expected later this month. 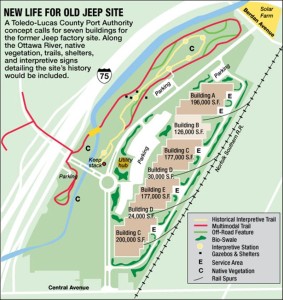 The original site plans for the Overland Industrial Park shared by the Port Authority in 2011 included a “Multi-Modal” trail with “off-road features” and JPFreek has not yet received a response to an inquiry as to whether that’s still part of the plan.