You are here :Home Featured A Factory Diesel CJ-6 Reborn 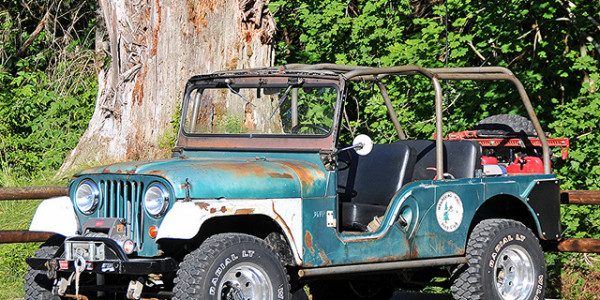 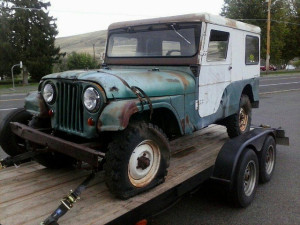 The 1966 diesel CJ-6 as it came home after three decades waiting for rescue in a field in eastern Washington. Thank you Mitch!

The story of finding this Jeep goes back to my ARB days when Mitch Carter, the owner, and I worked together. Jeeps are a popular topic at ARB and one afternoon Mitch mentioned to a coworker he had always wanted a factory diesel CJ, but that they were impossibly rare. I overheard the comment from across the room and told him I thought I had seen one for sale on craigslist recently.

Tracking down the ad, it read something along the lines of “1966 TJ7 diesel” with no photos and it was clear they did not know what it was. To make matters more complicated, the Jeep was in a remote area of eastern Washington. Luckily, the owner included a physical address, so one Google Earth search later, we were looking at a possibly factory diesel 1966 Jeep in a field.

Mitch contacted the seller, but with no response after two weeks, he finally decided to take a chance and go see if it was still there. Cash in hand and trailer in tow, he drove 300 miles to find the Jeep was there, but nobody was home! He gave it quick look-over and confirmed it was a factory diesel, then decided to get some lunch and try later.

The second try was the charm as the farmer had returned and Mitch casually asked if the Jeep in the field was for sale. The owner confirmed it was for sale and negotiations began until they settled on a price and loaded the Jeep—the first time it had moved since 1977! An accident had damaged the radiator and frame and the Jeep was parked, to await rescue. 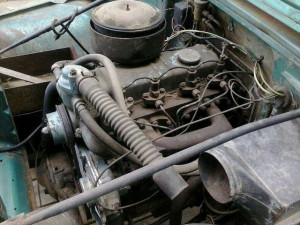 The four-cylinder Perkins diesel engine before the rebirth.

It’s not entirely clear how many Perkins powered CJ’s were ever produced, but the rough estimate is 575 and this is number 449. Of the few built, nearly all the diesel CJs were destined for export, making finding one nearly impossible here in the states, hence why this was such a spectacular find.

Once home, the real work began. There was immediate, serious concern about the engine when a patch was found on the side of the block where a rod had gone through it. After swapping all the fluids and getting clean diesel into the motor, a new battery was hooked up and she fired up after a few minutes of cranking! 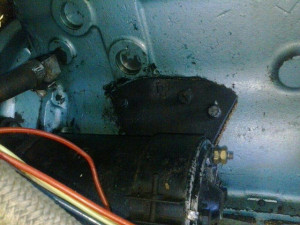 The homemade block repair that made it questionable if the engine would run.

Now a runner, some restoration work began to make it a driver again. The frame was cracked up front from the accident, so Mitch and his cousin Bill rebuilt the frame from near the firewall forward and added the winch plate. Replacement fenders were installed (he’s still looking for a set that match the factory color,) the radiator was installed, brakes flushed and the uber-rare two-third/one-third front bench seat and back seat were reupholstered. 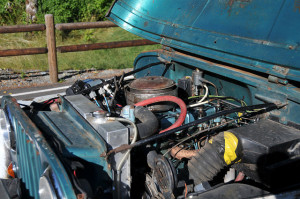 The refreshed engine ready for adventure. 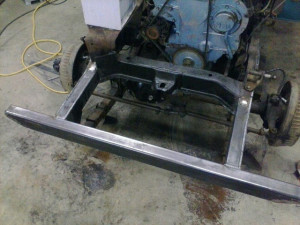 Frame repair on the front end.

Getting used again in Moab.

A period correct WARN overdrive was installed for on-road and a D30 was swapped in front before both axles got ARB Air Lockers to give the Jeep a fighting chance off-road. Eventually Mitch and Bill built the roll cage and rocker protection to finish the trail-worthy additions as the Jeep gets used regularly off-road—even making it’s way to Easter Jeep Safari this year. 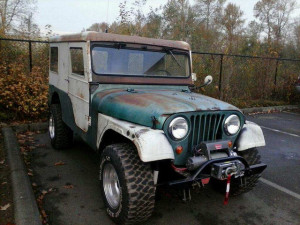 Marc Bowers is a lifelong Jeeper, car enthusiast, photographer and writer from the Pacific NW who has worked at ARB and MCE. With a passion for off-roading and Jeep-related, his work can be found in his blog “ExpoJeep” at WordPress. This story was republished on JPFreek with Marc’s permission.