You are here :Home Featured NAIAS 2015 – Year of the Jeep Renegade Begins @ Mopar

Officially known as the North American International Auto Show (NAIAS), the Detroit Auto Show will see Mopar showing off the accessories ready or soon-to-be ready for the new baby Jeep. What we’ve seen of the Renegade at testing at the Silver Lake Sand Dunes and when we named it to our top Jeeps at SEMA 2014 has impressed us — as long as we keep in mind that this is up against lame competitors like the RAV4 and such. It’s no Wrangler, but we think it’s poised to own the subcompact SUV market. 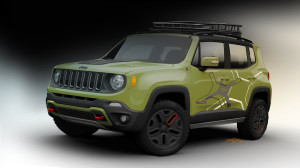 Mopar will display two Renegades, one “Off-road equipped” and one “Urban.” We’ll focus on the off-road version, for obvious reasons.

Here’s what Mopar has to say:

The off-road Mopar-equipped Jeep Renegade is a triple threat — the small SUV arrives already fortified to stay true to the adventurous lifestyle and 4 x 4 capability for which the Jeep brand is known, is further geared to meet the demands of off-roading as a Trailhawk model and gets even more distinctive personality thanks to Jeep Performance Parts and prototype parts.

The unique Commando Green skin of the Renegade is highlighted on both sides by large, bold body-side graphics that pick up on the “X”-shape styling of the taillamps, which come standard on the 2015 Renegade. The graphics also play off the Jerry can “X” design associated with first-generation military Jeep vehicles.

In a nod to the Motor City roots of the NAIAS, a map of Detroit decorates the Mopar Topographical Hood decal, a popular new customizable Mopar accessory introduced last year.

The satin black wheels feature a single spoke trimmed in Colorado red, while tow hooks that come standard at the front and rear of the Trailhawk model also receive the same treatment. Cross rails and a Mopar roof basket — perfect for carrying gear to the trail or sport equipment back home — are satin black, with a gloss black body side rail. 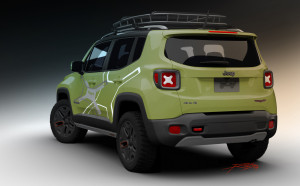 A concept skid plate, prototype rock rails, rear valance and production roof rails equip the Jeep brand’s new small SUV to handle off-road obstacles, and are neatly tied together by a matching neutral grey satin color. Additional protection underneath is provided by a production Mopar skid plate kit. Jeep badging at the front and rear also is trimmed in neutral grey.  The Jeep name is laser cut on the prototype rock rails, which are made to “pop” further with painted red edges.

Heading inside, the trail-ready capabilities of the Renegade are balanced with premium interior appointments, including Katzkin leather seat covers. HVAC bezels, speaker grilles and the center console are highlighted in Commando Green, matching the exterior. The wheel, shifter and door lever receive satin black trim, with all bright interior badging finished in neutral grey.

Jeep Authentic Accessories round out the modifications, including Mopar slush mats in the front and rear to protect the interior. A Mopar cargo tray provides additional storage space, and Mopar doorsills are emblazoned with the Jeep logo.

While a lot of what they’re doing here is clearly cosmetic, we think that this could be a great entry-point for folks to get into the Jeep brand and we can’t wait to check these out and get behind the wheel. The interior space shocked us (leading to the #15 ranking in our top SEMA Jeep list) and the MPG numbers and drivetrain options with a Jeep 4×4 system lead us to think this could be a great daily driver option.