You are here :Home Jeep News Save The Hammers Immediate Action Needed Today – 11/13/13! 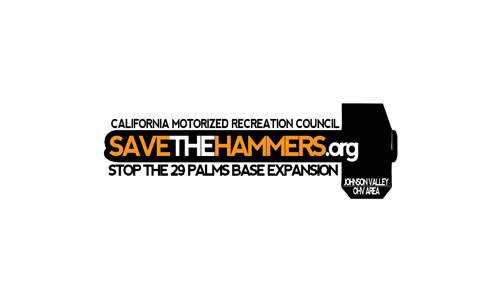 OHV Call to Action! Your Immediate Action is required to Save Johnson Valley on Wednesday, November 13th!

The Senate Arms Service Committee now looks prepared to move their bill S1309 to the floor beginning Thursday with Senator McCain managing (Senator Inhofe is out for his son’s funeral).

It is time again for the OHV Community to engage in the discussion.

Please consider taking some time to participate and extend our reach to your friends, family, and networks that find the value in saving the largest OHV area in the United States, while meeting the training requirements of the USMC. Your participation is paramount to our continued success.

While the Marine Corps let the Cook/Mckeon Compromise go unchallenged in the House of Representatives, we believe they will introduce their Alternative 6 language through Energy and Resources Committee on the Senate side via S 1309.  We must contact these individual members of the Senate to ask them to opposesuch language.

1.)  All Organized OHV Associations Leadership must call Sen. Feinstein, Sen. Levin, Sen. McCain. Be prepared to tell them how many members you represent. Activate your Membership!

2.)  Home and property owners in the Johnson Valley must call the San Bernardino Board of Supervisors, and Senator Feinstein.

The Time Is Now

Messages for call in:

         Livefire and the potential for unexploded ordnance in the proximity of recreation lands and within a mile of dozens of homes is insane.

You are Asking for them to do the following: Do NOT include the Johnson Valley Land Transfer in S. 1309 and definitely do NOT include it in the Senate version of the NDAA

-The Johnson Valley Land Transfer in S 1309 is EXTREMELY controversial. It certainly should not be considered together with other relatively uncontroversial land transfer bills.

-The Marine Corps has never reached out in any meaningful way to the local community on this issue. That’s why all four surrounding cities (Twentynine Palms, Yucca Valley, Apple Valley, and Hesperia) have passed unanimous resolutions opposing the expansion, as has the County of San Bernardino.

-The House NDAA has compromise language that would allow the Marine Corps to conduct training in the Johnson Valley 60 days a year, while still allowing recreational use the rest of the year. San Bernardino County, all local governments, and the overwhelming majority of local residents support this compromise.

-The Marine Corps Air Ground Combat Center at Twentynine Palms has already been plagued with intrusions on to base and has even had issues with scrappers crossing on to base and taking unexploded ordinance. By dropping live bombs in the Johnson Valley (a heavily recreated area), it will only be a matter of time before a family is killed by a dud bomb during an inadvertent intrusion on to base land.

As always, be courteous and take your time getting your point across.  It is likely the staffers you are speaking to have no idea what or where Johnson Valley is.  Make a good impression!

This is happening today or tomorrow, so your calls are really important.  We are making a difference.  Now is the time to push harder.