You are here :Home Featured The Long Way to Moab | Part 2 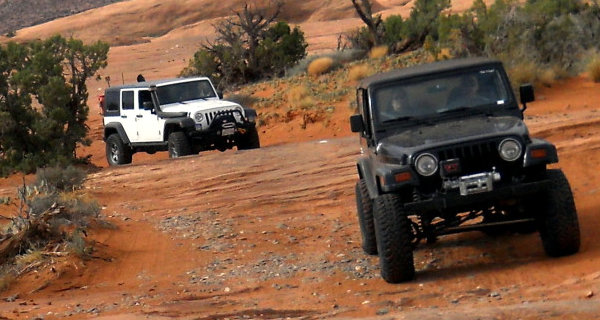 The Spring 2013 edition of JPFreek Adventure Publication had part 1 of the “Long Way to Moab” where we followed a group of Jeepers on an overland and offroad route to Moab Utah. We now bring you part 2 of the story. Enjoy!

Part One of this adventure brought us the long way from Phoenix, through Lockhart Basin, to Moab where we arrived to power-outage chaos. Now with four days of 4-wheeling about to begin, my co-leader George and I along with some Offroad Passport members (Christian, Dennis, Randy, Mike, and Wayne) straggled in from the trail to find Scott already at the campground. Unpacked and showered, we shared a six-pack before calling it an early night. Everyone was pretty fired up about our next day’s trail.

Most of us ran Poison Spider last time in Moab, but none of us had ever run the ‘Trifecta’ known as Poison Spider, Golden Spike and Gold Bar Rim trails. That was our plan. Poison Spider is my favorite trail in Moab because the obstacles are fun and interesting, but not life-threatening, and the scenery is absolutely amazing. Little did I know, the Trifecta would soon become my new favorite for those same reasons and more! 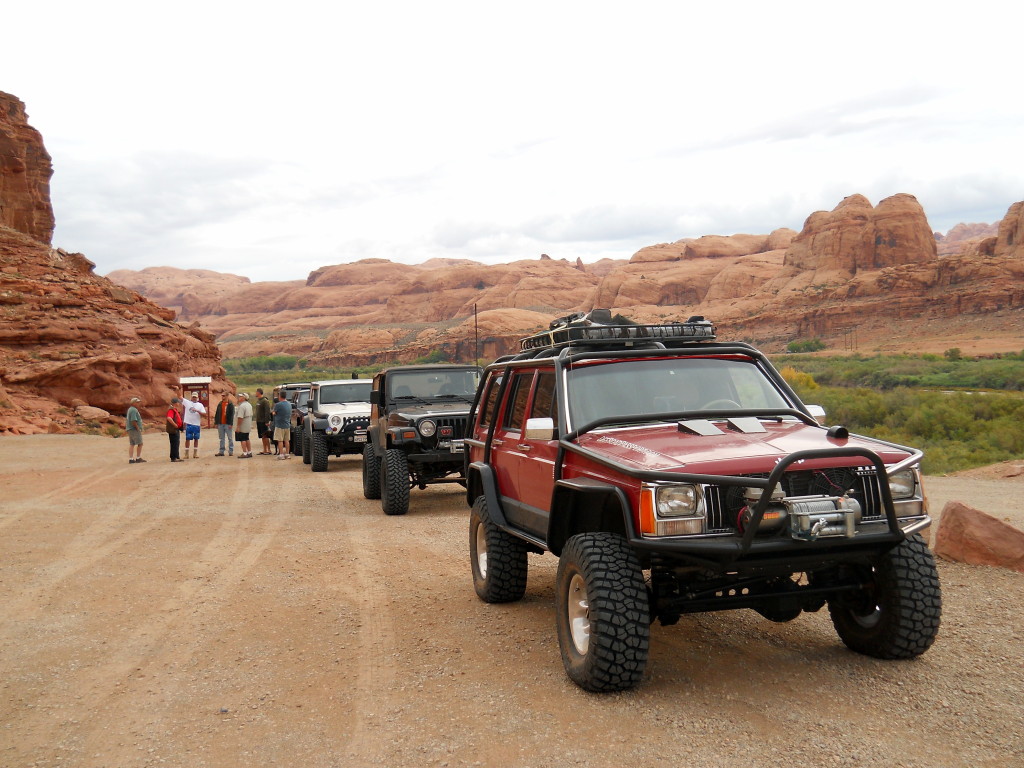 We met early Tuesday, fueled up, and then convoyed up Highway 191 north through Moab, across the Colorado, and left on Potash Road to the trailhead. Almost six miles south of town, the Poison Spider trail starts from the parking lot of the Potash Road Dinosaur Tracks and Petroglyphs. We aired down and had a driver’s meeting. We were on the trail before 8:00 AM. The trail climbs up some switchbacks at first, which seemed a little rougher than last year, so we shifted into 4-low almost immediately. 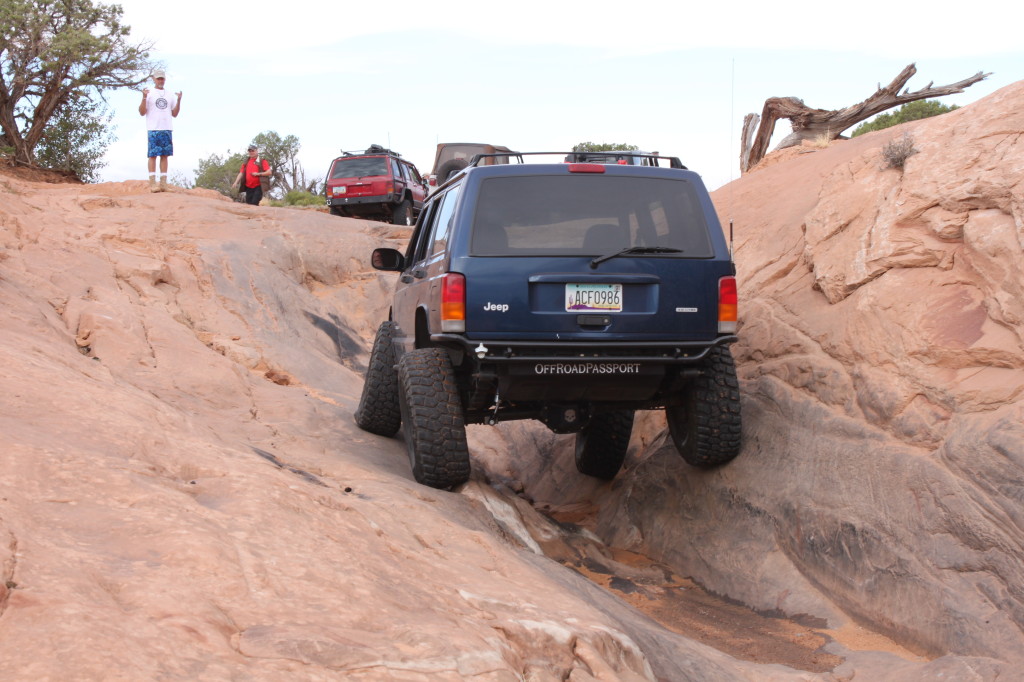 The first obstacle is the Waterfall which features rocks in a z-shape up over a ledge followed by several other tough steep sections. After making our way up a slick, rocky series of switchbacks we came to The Wedgy. It’s a nice photo-op because of the articulation involved. As Christian approached in his 2008 Rubicon JKU, he asked us if he should take the by-pass in his German accent, “I have never done such a thing”.  We asked George to spot him, and he did the obstacle. 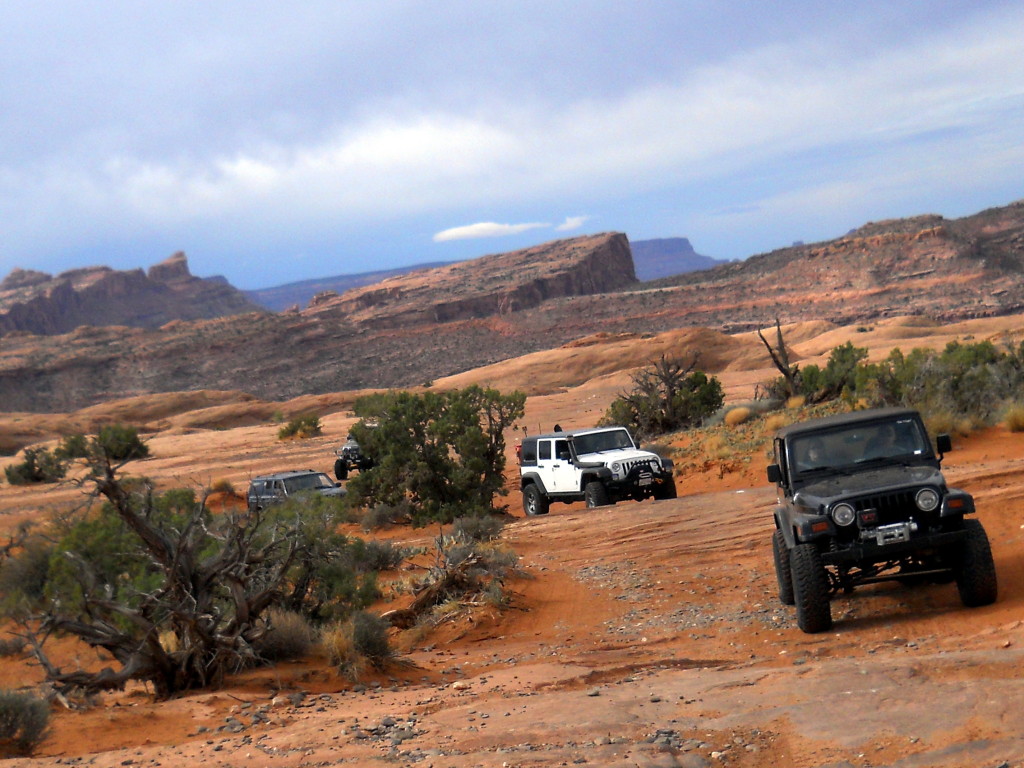 Once on top of the mesa, the trail gets smooth and is dubbed High Speed Mesa – we call it the boogie section. Up there you’re surrounded by gorgeous views of Arches National Park, Canyonlands and Behind the Rocks. 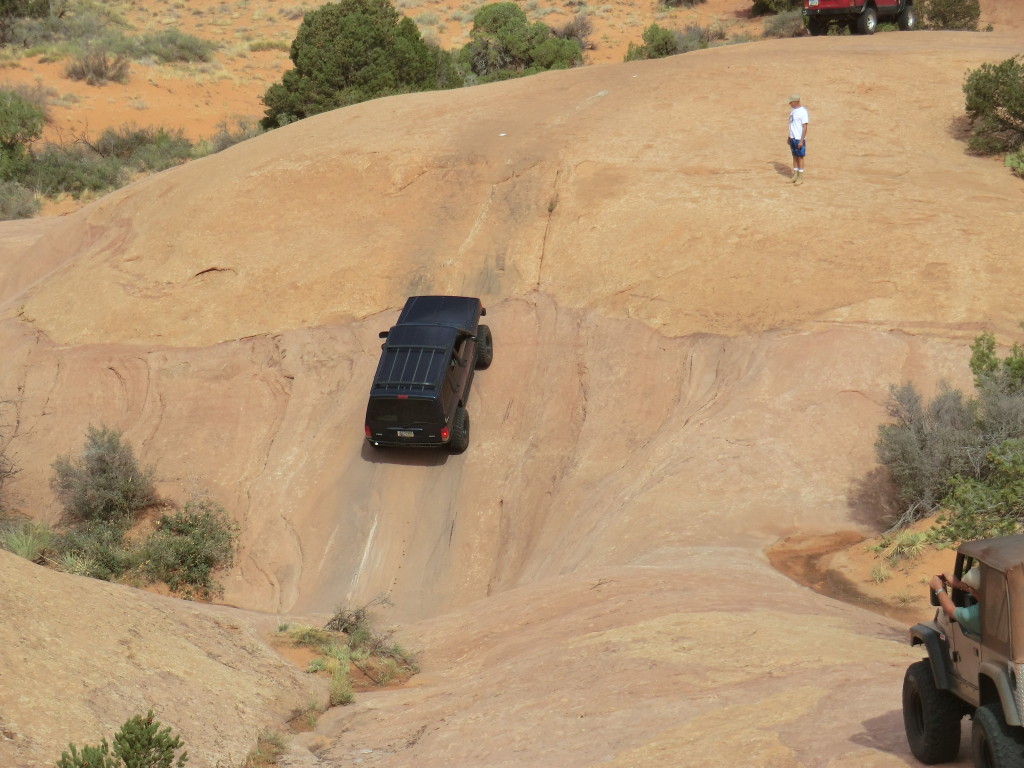 With no time to run the Poison Spider loop, we turned off at Golden Spike and took a short break. We started out across sections of wide rolling rock between patches of sand. A mile later we came to the Launch Pad – a steep drop-off into a dip and then straight back up the other side, with an extra lip at the top giving you the impression of tipping backward as you climb it. 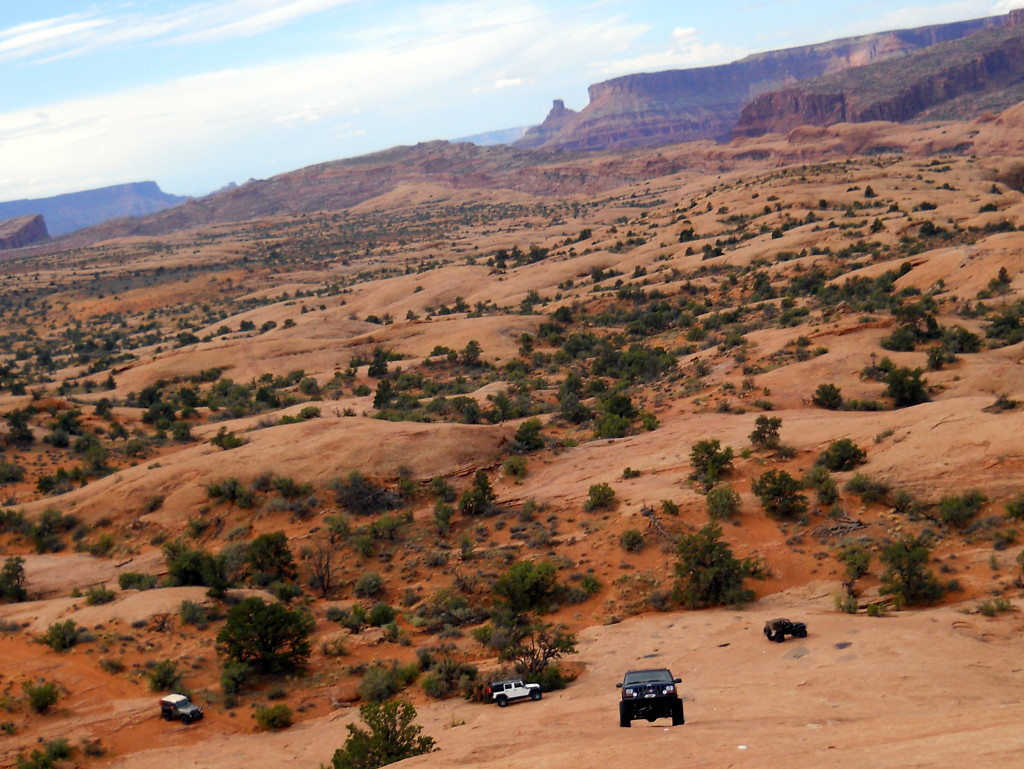 Farther along on the trail we came to Skyline Drive, which is an optional loop up a super steep dome. You should see the view from up there! 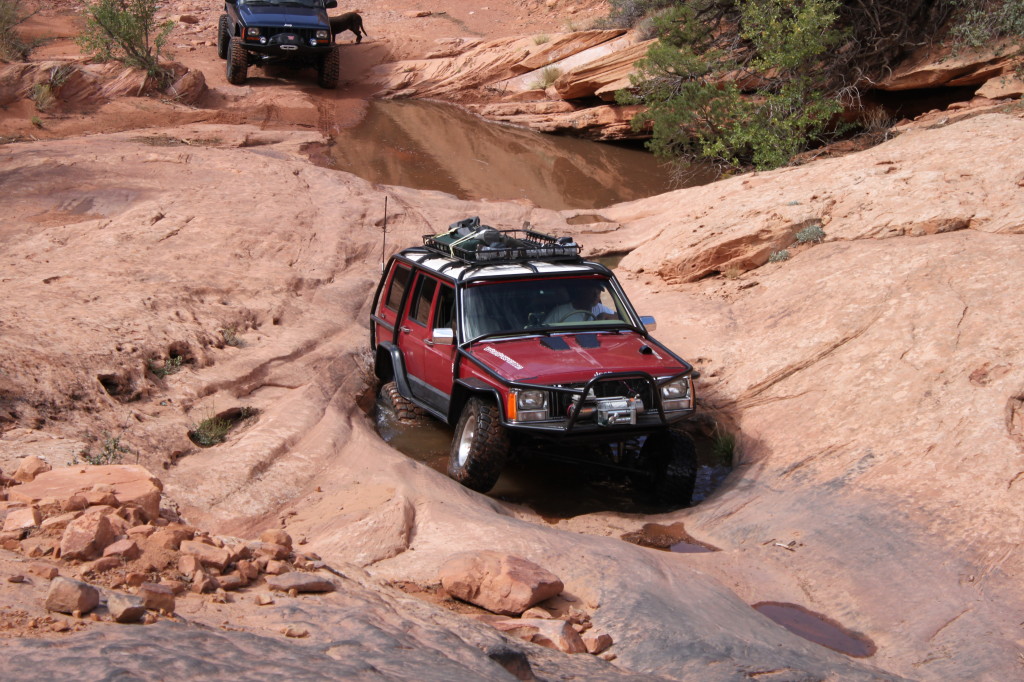 The trail dropped into a ravine with wind-holes in the sandstone along one side and we zigzagged through. We climbed a steep ledge out of the ravine and immediately came to Zuki Hill. Seemingly innocuous, this obstacle posed some challenges. There is an unavoidable pool of water at the bottom that wet our tires on approach to the slippery ledges. 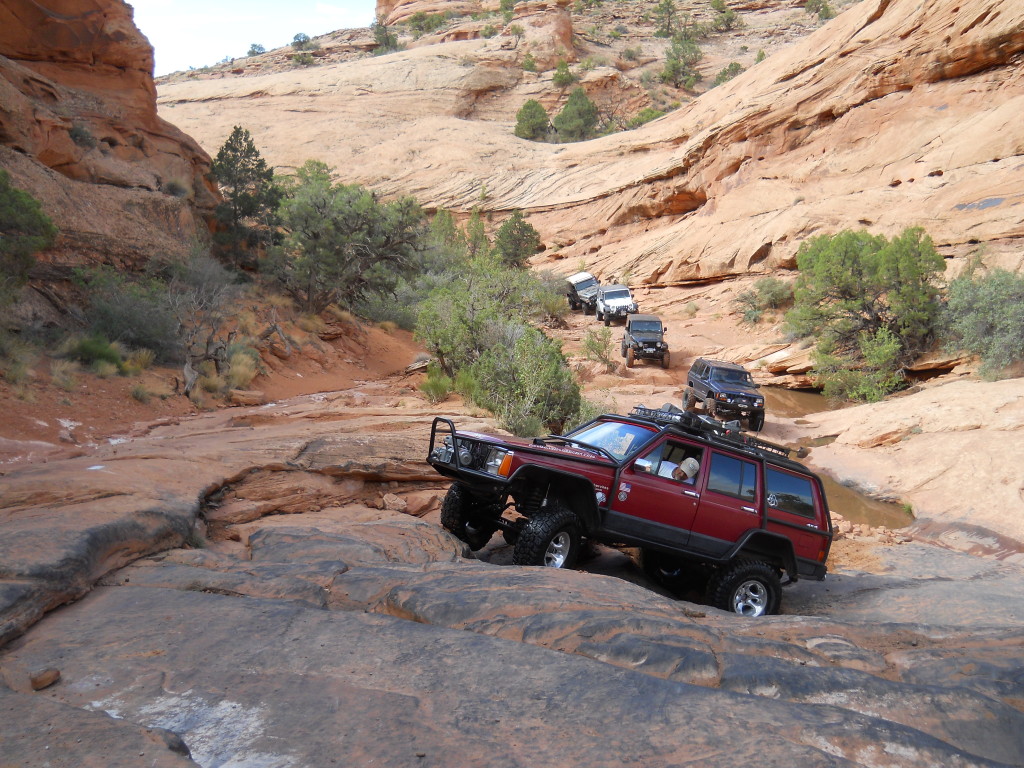 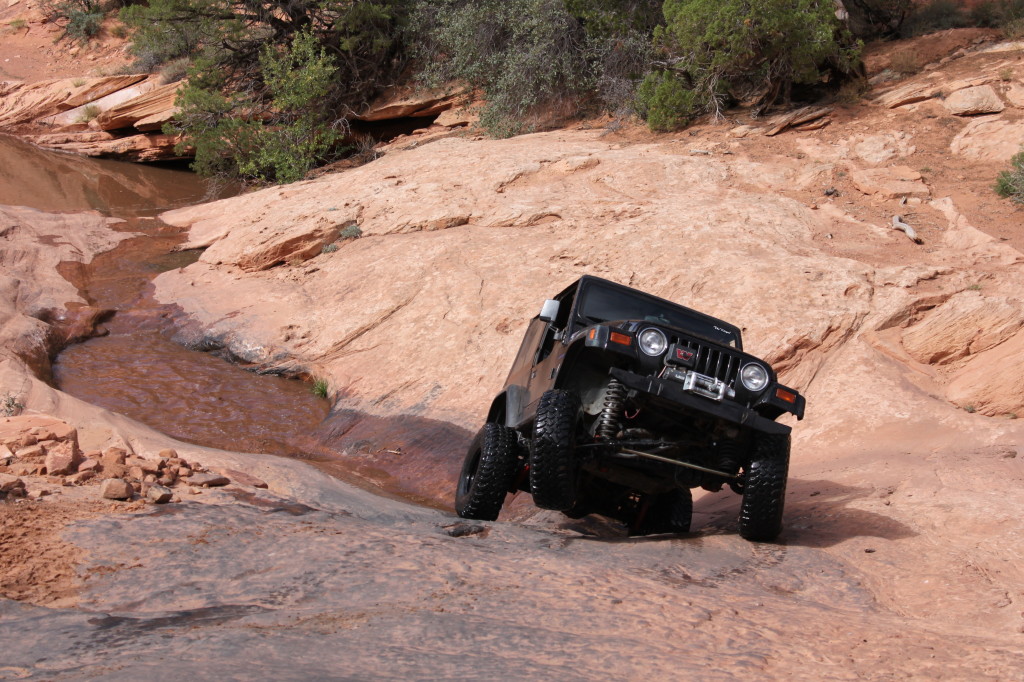 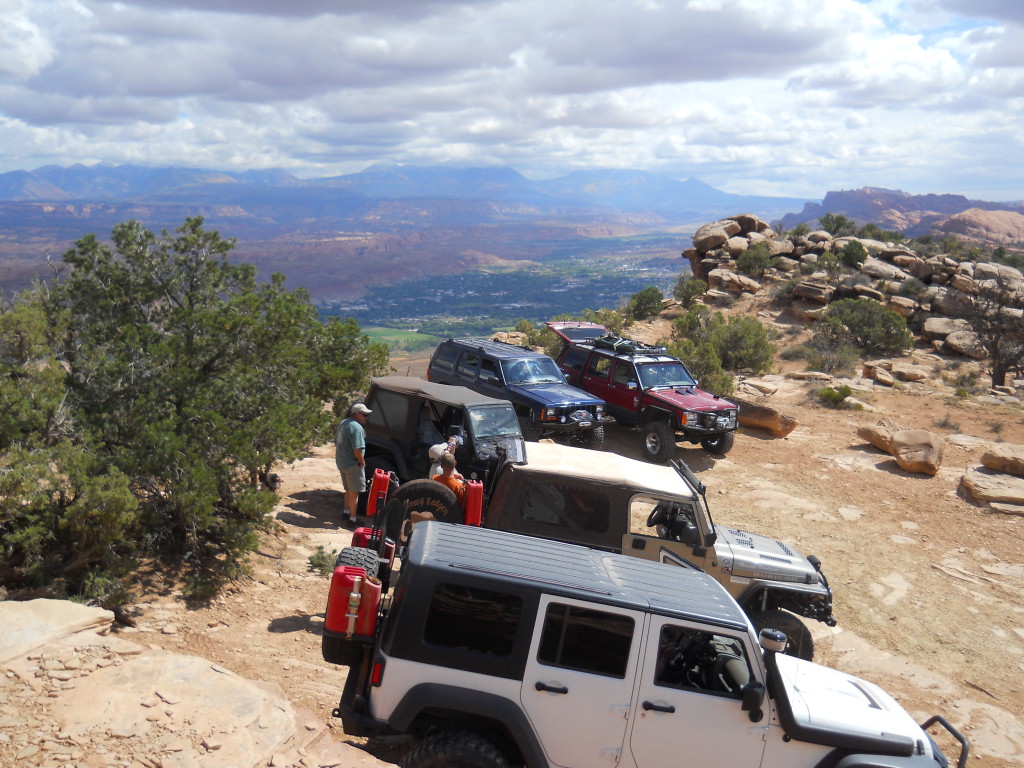 After Zuki Hill, the trail climbed slick-rock up onto a narrow bluff where the scenery seemed even more spectacular. We were now running parallel to and very close to the rim so we stopped for an early lunch at a lookout above the Colorado River with Moab in the foreground. 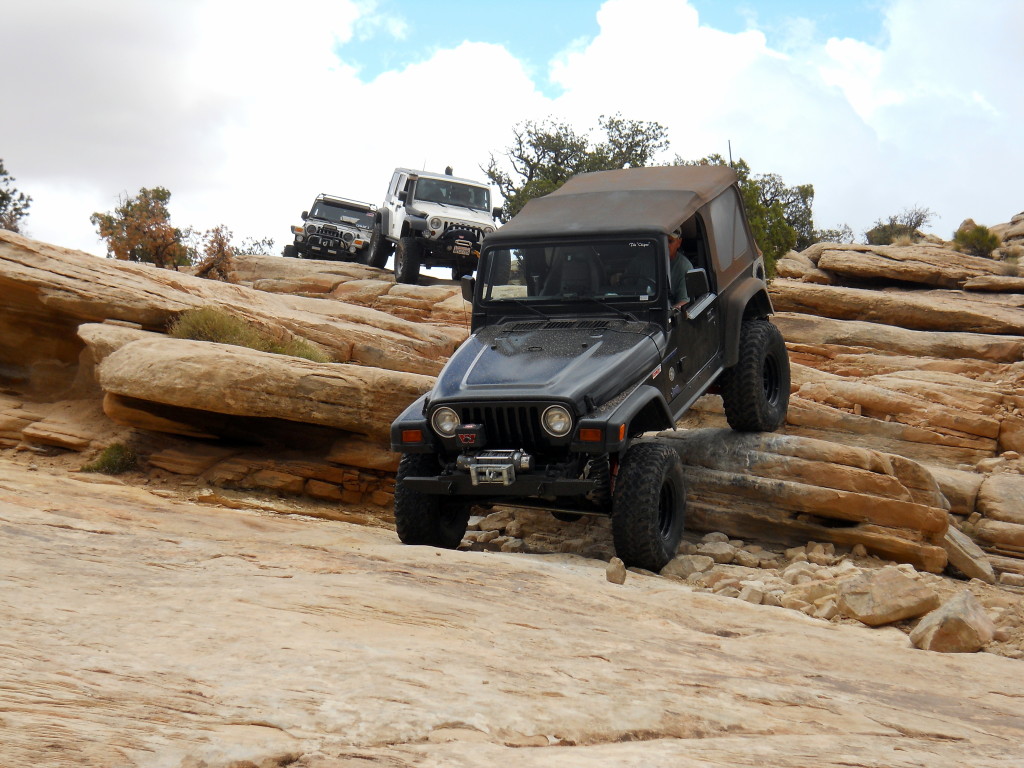 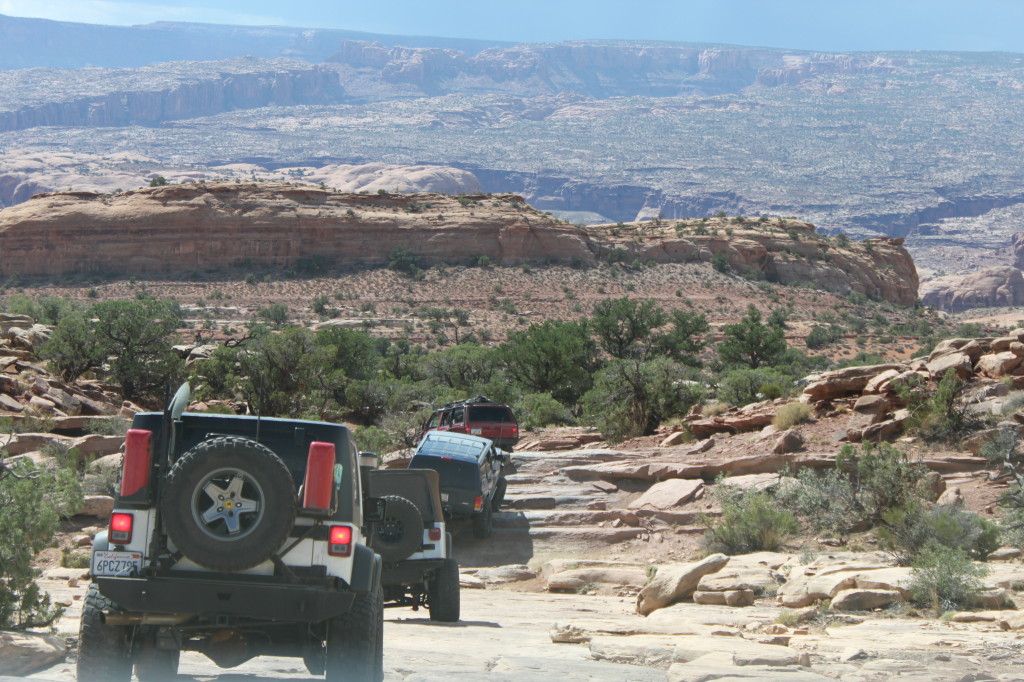 After lunch we continued alongside the rim and came to a series of step-downs and difficult route-finding just as the wind picked up and it began to rain. George drove, Randy spotted him, and I took pictures. It was a technical section and the wind and rain made it seem even more intense. 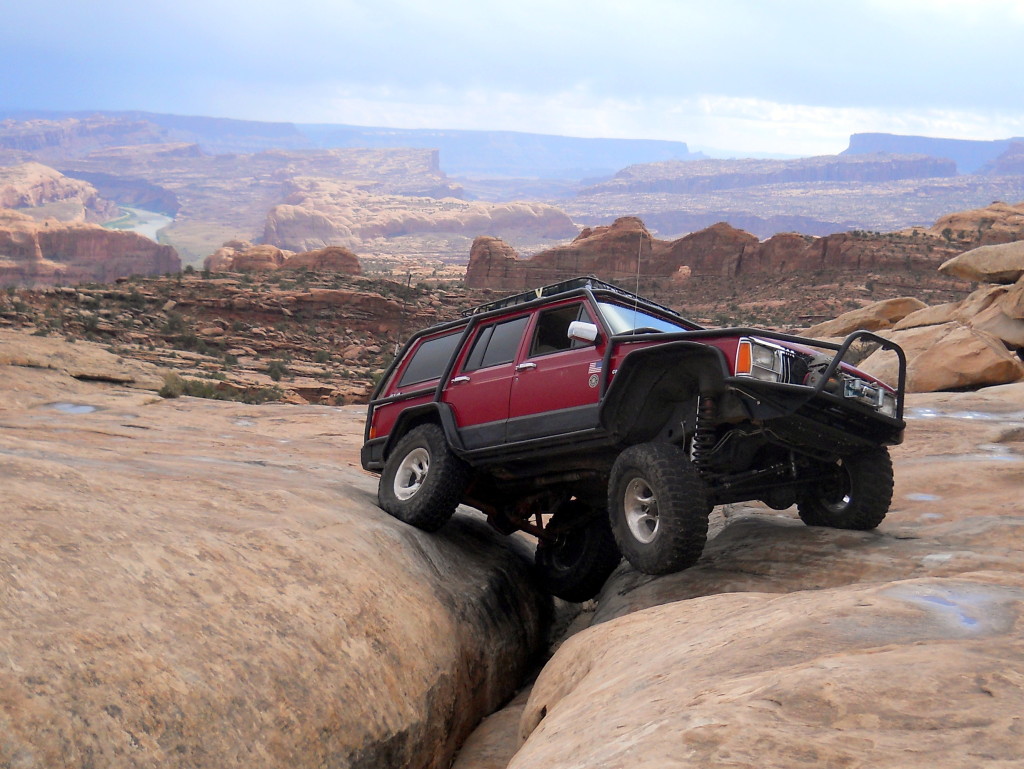 Next we were on a wide flat expanse of slick-rock overlooking the Colorado River as we made our way to The Golden Crack, where we one-by-one went across as the others took pictures. 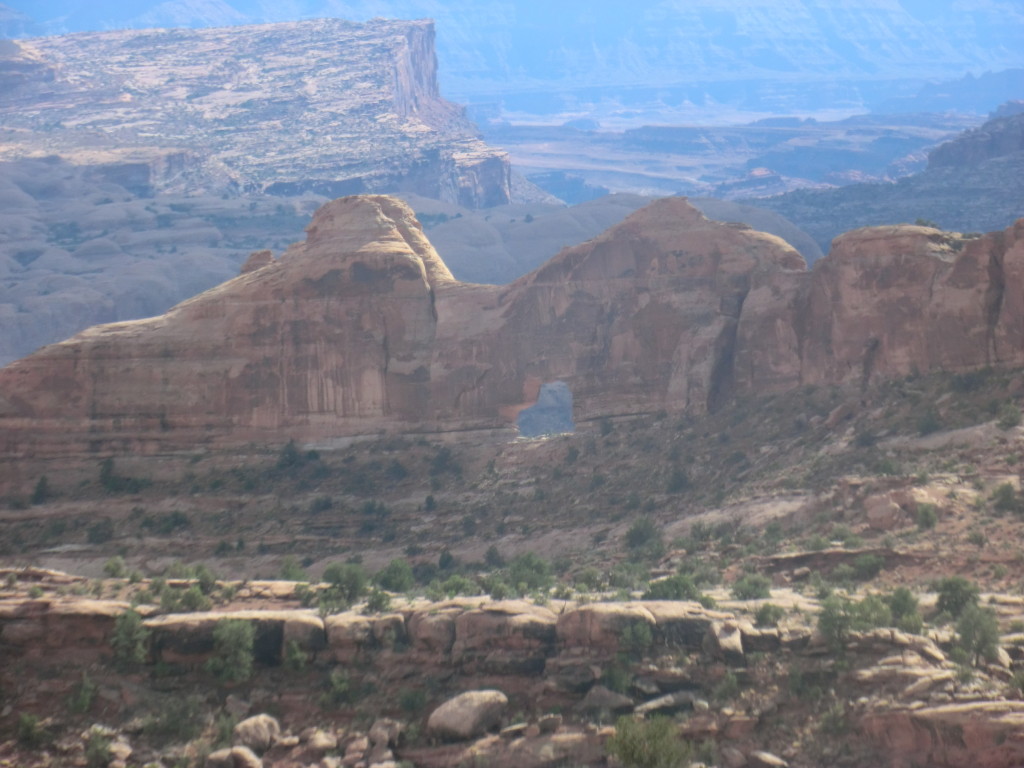 The view from here to the south is beautiful. If you go, look for the arch known to the 4-wheeling crowd as Jeep Arch (although it looks like a heart to me). 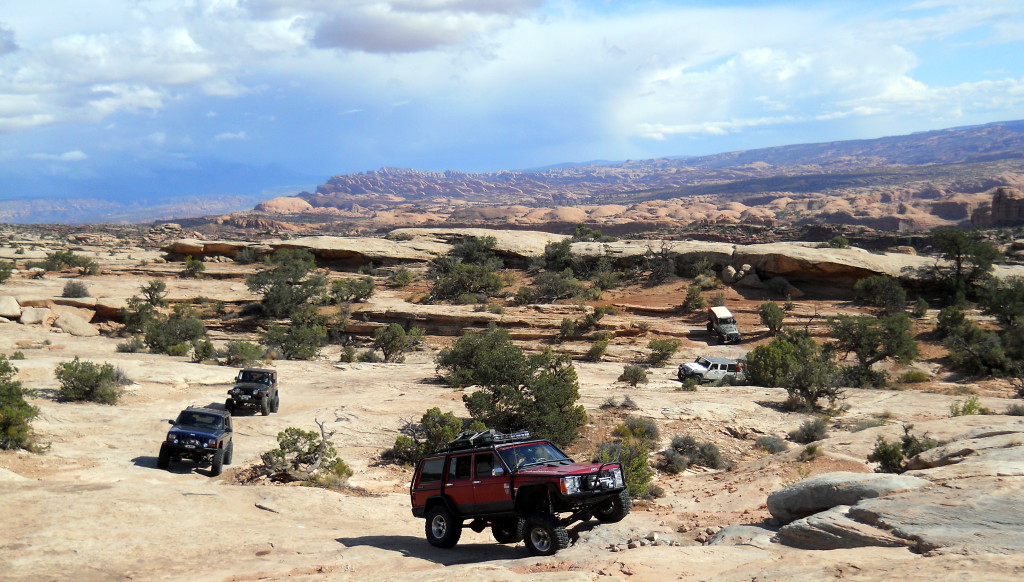 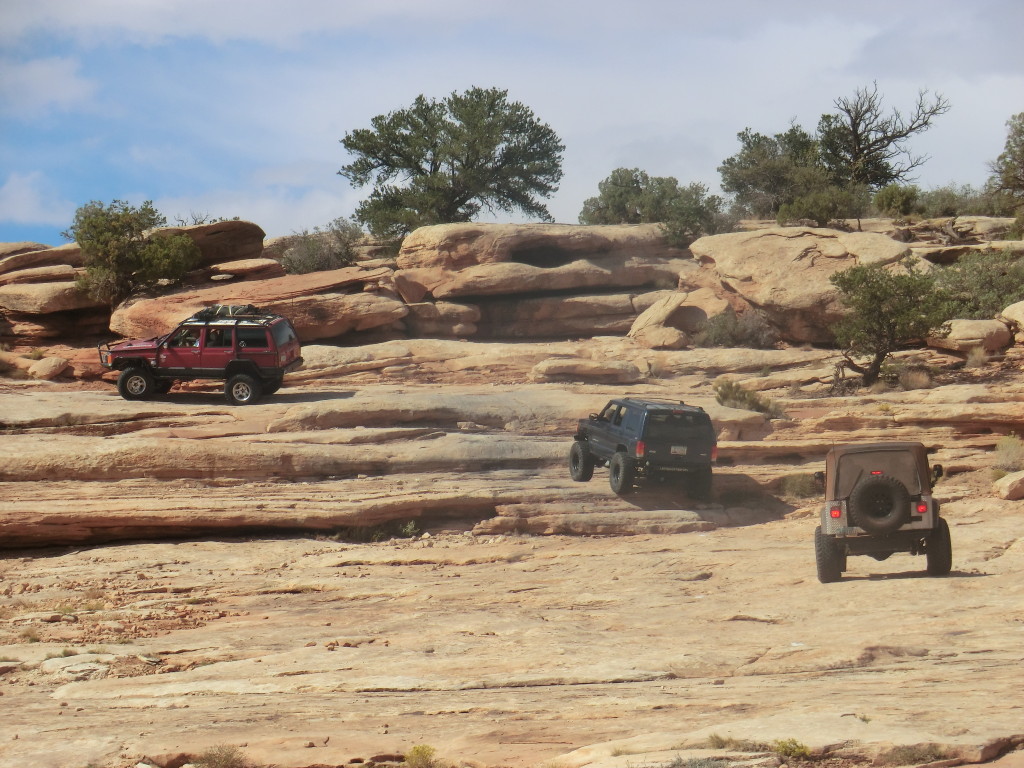 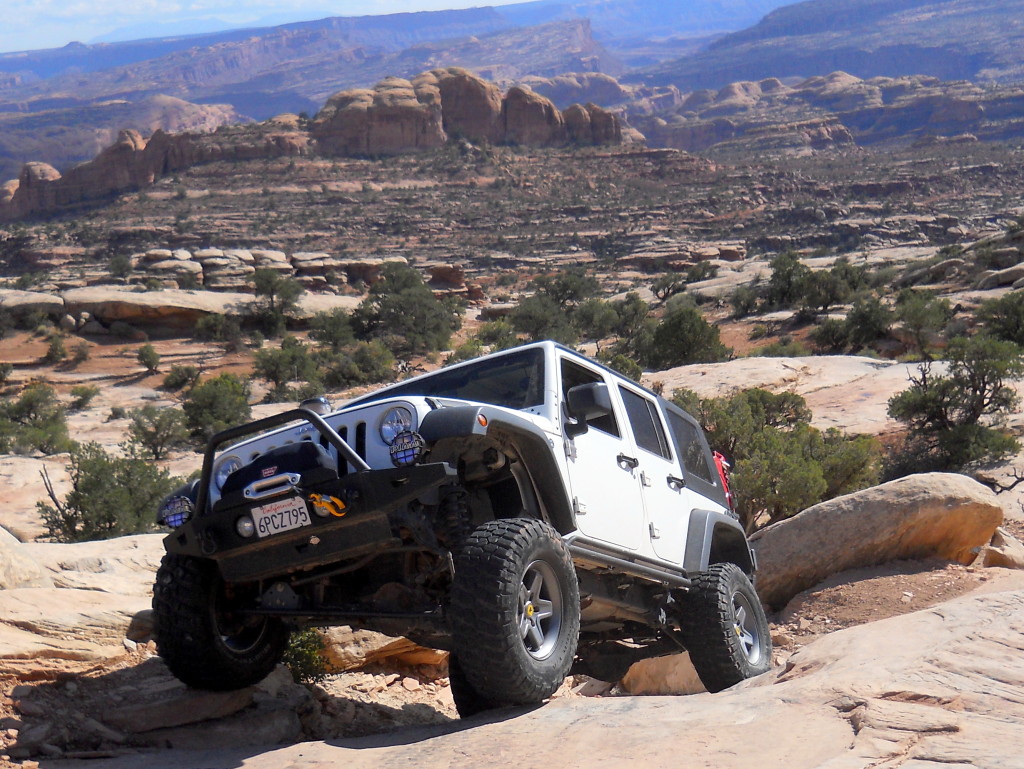 There were more challenges ahead as we crossed lots of steps & ledges, along with obstacles named Golden Stairs and The Wall, for which there are no bypasses. We bypassed the extreme Double Whammy.  Most of us squeezed through Body Snatcher, except Christian who I convinced to go around when it looked certain he would sustain body damage. Near the end of Golden Spike, George and I took a wrong turn and had to double back when we came to the cliff. Orienting ourselves, we found the way and were now on Gold Bar Rim descending a section of ledges dotted with trees. 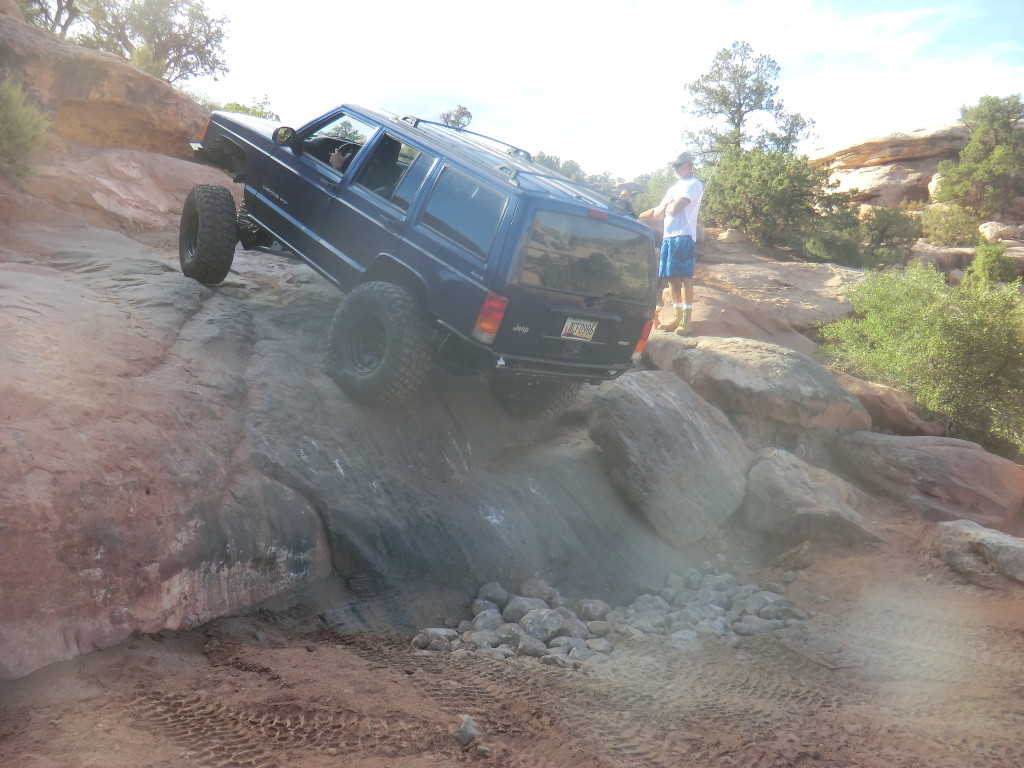 Just when we thought the challenges were all behind us, we came to a huge rock ledge.  Steep and slippery until we found just the right line, we couldn’t get traction on it. Finally lined up toward the right side, George hit the gas and up we went. Everybody made it up after a couple tries. We followed the maze of sandy roads to Gemini Bridges Road, which was now like a flowing a river after the rain! We passed Gooneybird and after five long miles reached Hwy 191 just before dark.  Everybody was tired so we parted ways until morning. 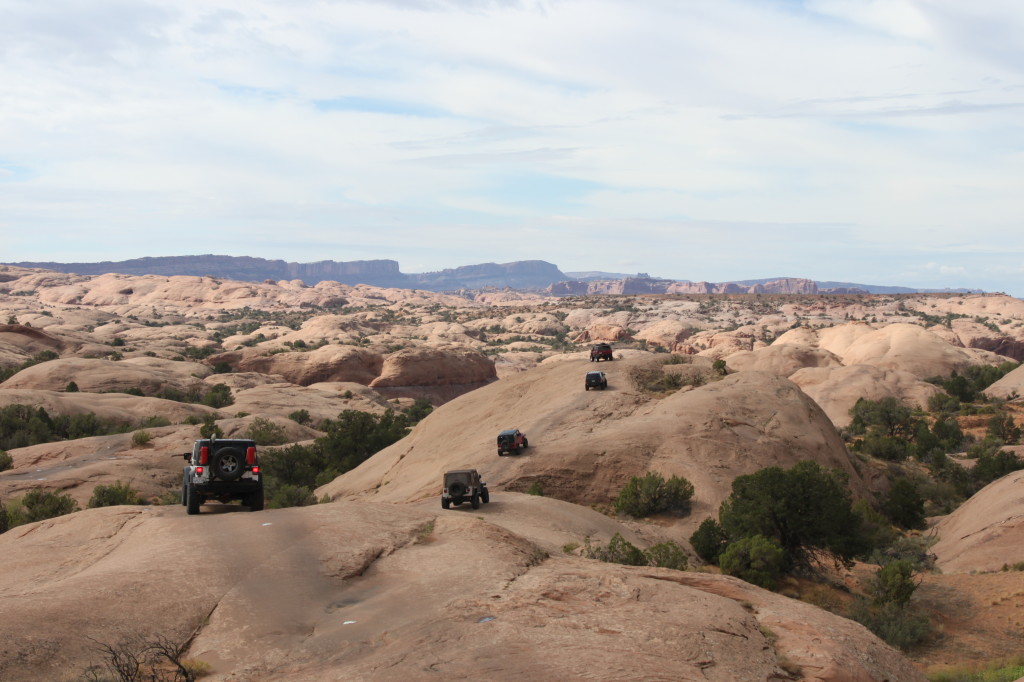 Our original plan Wednesday was to run Steel Bender, but it rained steadily all night and showed no signs of clearing. None of us had run it before, but the trail book said one part is impassable when wet, so we opted for Plan B. None of us had ever run Fins N Things before and since it’s near town so it seemed like a good option. We each paid the $5.00 entry fee to Sand Flats Recreation Area and made our way to the trail. 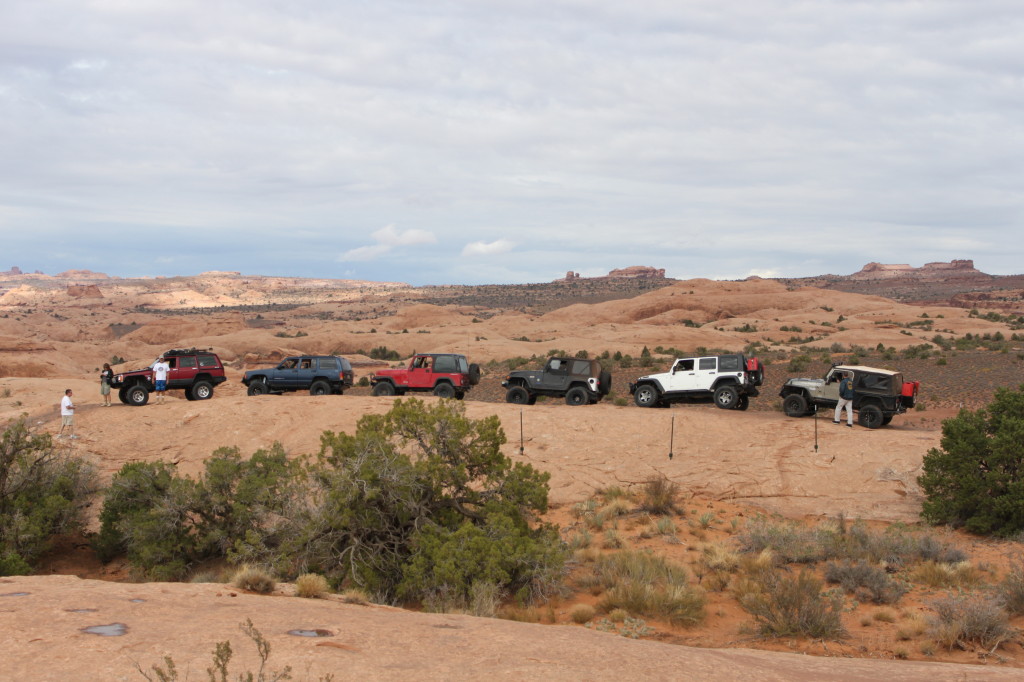 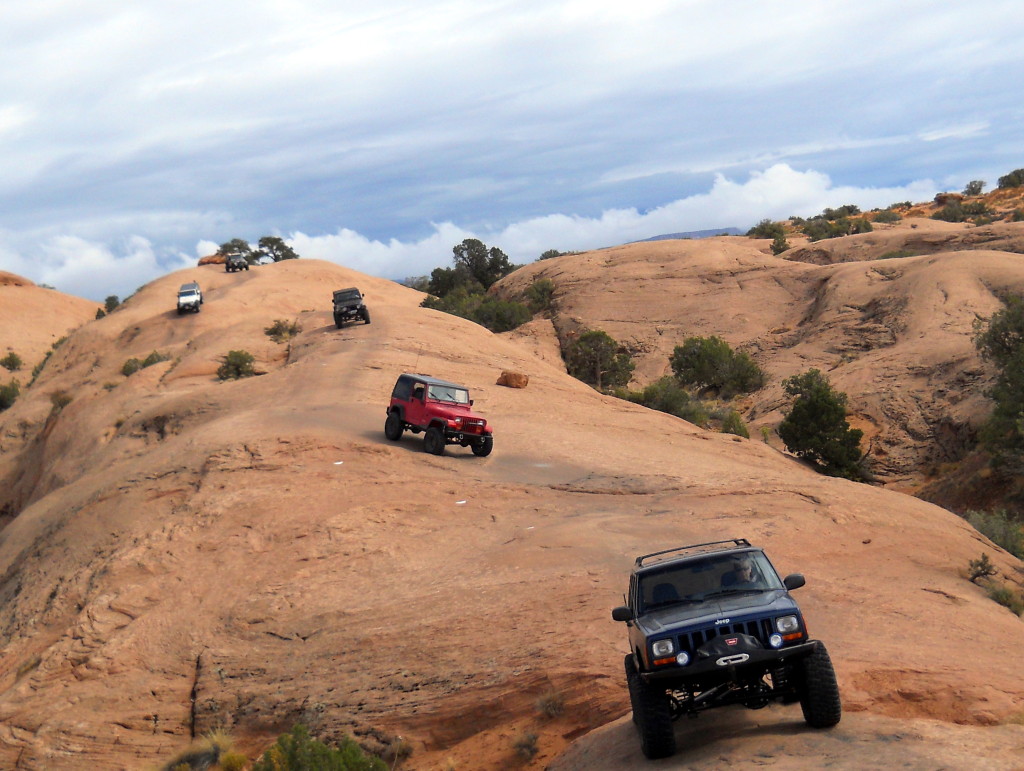 It turns out Fins N Things is a pretty cool trail up and down and around slick-rock and sand with awesome views all over the place. It’s a little hard to navigate if you’ve never been there, so it was comforting to see trail markers. The weather was clearing and we had lunch on a rock fin next to a wind-swept canyon. There were a couple of slightly tricky ascents, and some places were so steep you could see the trail markers way up ahead, although other times they were hard to find. Part of the route is out on the main Sand Flats Recreation OHV road before going back to slick-rock. 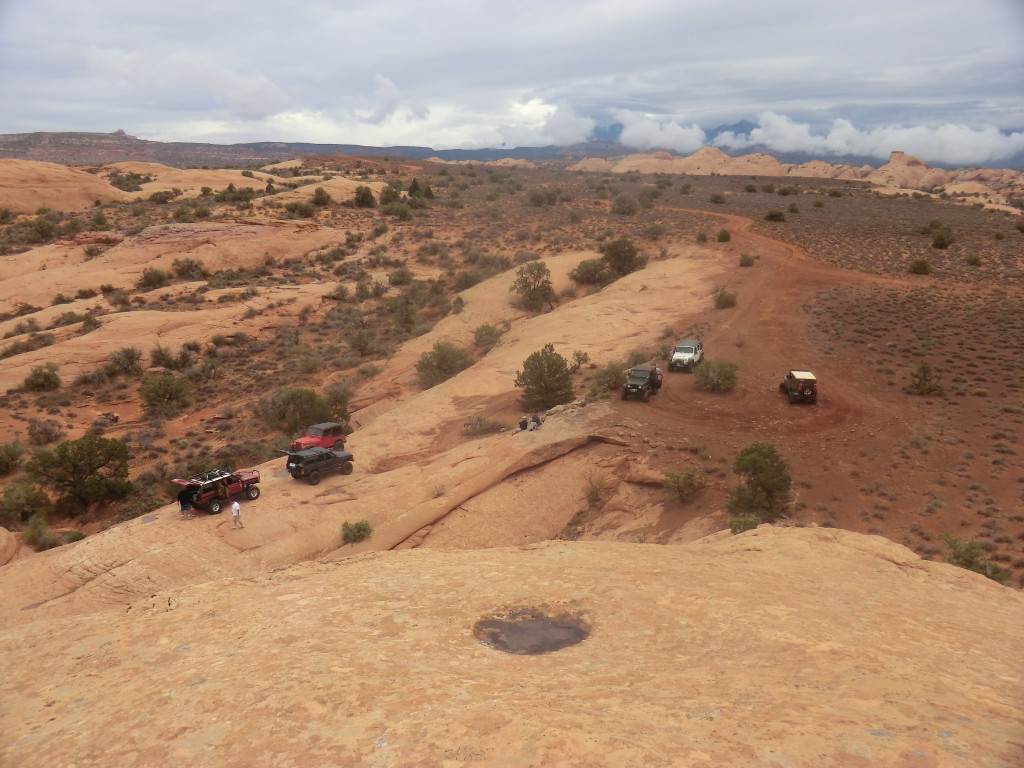 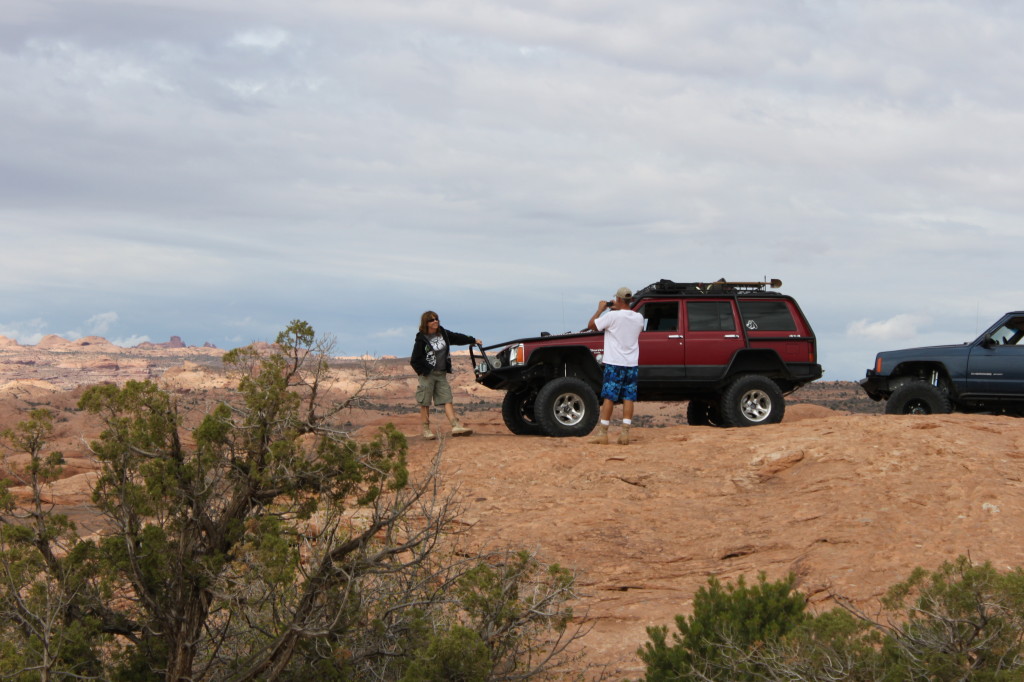 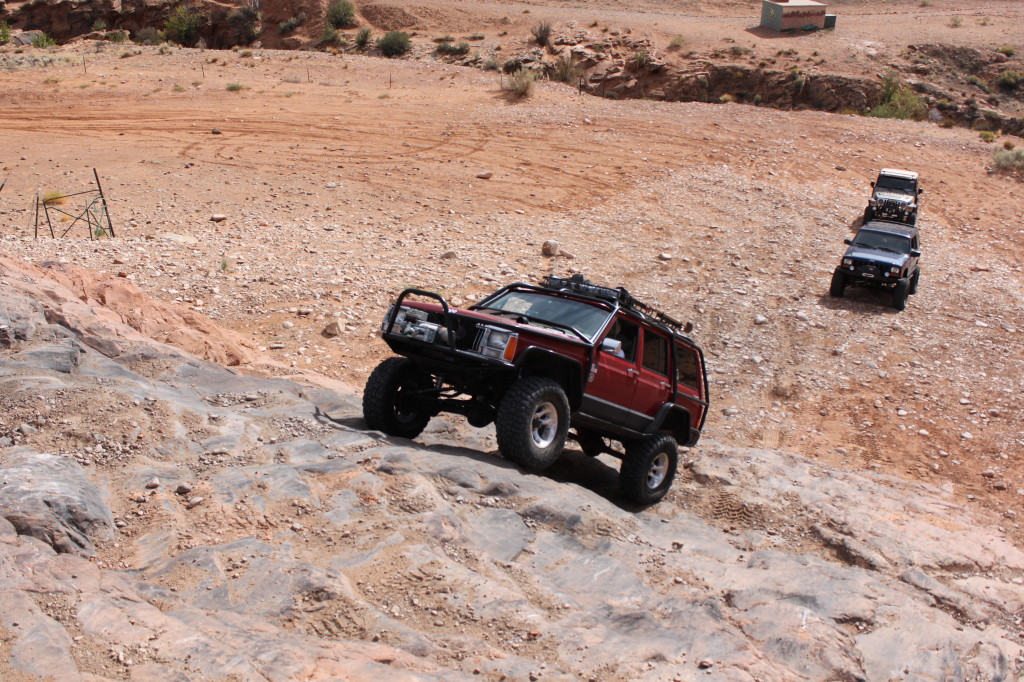 When we finished running Fins N Things the sun was out and we decided to kill some time over at Potato Salad Hill. Last year George and Scott both drove up it, and even though Dennis and the rest of them all tried, only Scotty made it up Potato Salad Hill that day. By now the weather was perfect and it was still really early, so we decided to go shopping for the stuff to grill hamburgers at the campground. That evening while feasting on the best burgers ever, we ate, drank and yakked about trails and rigs. We also decided that come hell or high water, we were running Steel Bender tomorrow! Okay well, not the high water part.

Contributing Editor: Diane has been involved in the Arizona Jeep Community for about 10 years, since buying her first Jeep, a 2001 Cherokee. She is a co-founder and trail-leader at Offroadpassport.com. Expedition travel became her passion about 4 years ago; she’s co-led trips ranging from the Devil’s Highway to The Rubicon. A member of numerous Jeep clubs in Arizona and California, she is a regular participant in multiple annual events such as public lands clean-ups and game and fish expos, and is well known for her trip reports at www.OffroadPassport.com and other local OHV forums.