You are here :Home Jeep Adventure Winter Wheelin' With NAXJA

Of course that’s not to say there aren’t times when rev-limiter bouncing isn’t needed. Another challenge is that the roads we’re on are totally snowed over, and it is nearly impossible to tell if your Jeep is in the middle of the road, or too far to either side.  In the front, all I had were a pair of faint snow-mobile tracks as my guide. These tracks led me wrong more than a couple times, one time resulting in me winding up in a ditch. A very deep ditch.

I tried backing out a few times, but the nose of the Jeep just kept getting further over. Oh, well; when in doubt, throttle out. The new tires did their job and rather than just clogging with snow and turning into slicks, they cleared out and grabbed and I was able to pull my way out. At about 4900 RPM. And third gear.

Our system worked well, me blazing a trail with progressively lower trucks clearing the way for the vehicles behind them. We made sure to space the vehicles out so those winches were evenly distributed within the group, should disaster strike. 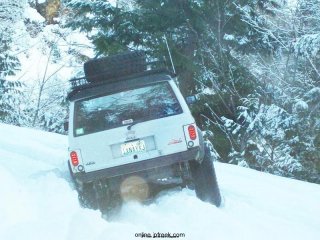 The trip had always been envisioned as a family trip with a long lunch break and time for kids to do some sledding. We stopped around 1:00 p.m. for a few hours to let the sizable car seat contingent stretch their legs and expend some energy, much to their parents’ relief. The sleds came out and much giggling ensued. The kids had fun too, whenever they could get the sleds away from their parents.

Those of us single people in the group occupied ourselves with seeing how evil and ice-packed a snowball we could rocket into the back of some unwitting victim’s head.

With the short NW winter day well into the latter part of its life we decided to push on. Jack Pass, the destination of our snow run, is something of a unicorn for us as we’ve never reached it in our previous attempts. We were making such good time and the snow was so ideal we all thought we might be able to make it all the way over the Pass. That dream was dashed after about a half mile.  We came around a bend into a clearing and a wide spot where the sun was reecting brightly off the snow. All of a sudden my progress was halted. No problem, I thought, I can do no wrong today. Reverse, try again. Get stuck. Again, and again, not moving more than a few inches forward at a time.

Okay, so finesse wasn’t going to work. Time to bring out the horse power. And this is where I got utterly, completely, totally and terminally stuck. No big deal, I’ll just have the guy behind me pull me backwards, and we can continue.  Out came the tow straps, shackles and shovels.