You are here :Home Jeep Adventure Winter Wheelin' With NAXJA

Back to our intrepid Jeeper, head under a cold shower trying to wake up. After shaking loose the cobwebs and getting on the road, I rendezvoused with a few other club members who live near me. We made our way northeast to the foothills of the Cascade Mountains. Our goal? SNOW!

In the Northwest we have a whole season devoted to “Snow Runs,” which can run from september to June. Basically it comes down to this; we are surrounded by mountains and most of our wheeling trails are in said mountains. In the winter those trails become either impassible or that much more challenging. It was with that in mind that 17 four-wheel drive vehicles assembled in Index, Washington, a little town in the North Cascades, to see just how far we could get along a forest service road up to a mountain pass simply called “Jack Pass.” 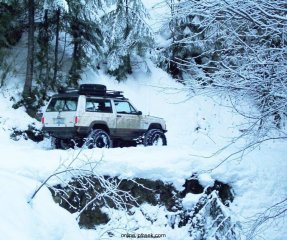 For the record, 17 is an immense number of rigs for a snow run of this type. Not only was it huge but it was seriously diverse. We had everything from a bone stock Grand Cherokee to a Land Rover Discovery to a Wrangler running Dana 60 axles, 5.38 gears, 38” bias-ply Super Swampers, and every conceivable avor of XJ in between. Who needs affirmative action??

At the trailhead we all aired our tires down, which we’ve learned is one of the most important things you can do to improve the effectiveness of tires in snow. It allows them to “oat” on top of the snow, rather then cut through it. In ve feet of snow, cutting through it  means you’re stuck.  Most of us were running between 5 and 12 psi. Public Safety Announcement:  DO NOT DRIVE ON THE STREET THIS WAY.

Around 11am we all made our way up the trail. I was elected to lead the convoy for a number of reasons, chief among them were the size and state of my tires. I had only put about 200 miles on a new set of 34×12.50 Interco TrXus M/Ts, tires that are ideally suited for Northwest snow. The group made good time despite our number, quickly gaining altitude. With every foot we ascended the snow became deeper and deeper. The day began around 1000 feet, and we were gaining consistently the whole time.

For me there’s a “re-learning” curve to driving in snow. After months of wheeling on surfaces that basically require the same techniques, the first snow run of the year can leave you wondering why you’re stuck.  It took a few miles for me to remember that wheel spin is your enemy in the powder. What I’ve found works is an adaptation of threshold breaking. When you feel the tires lose traction, letting off the throttle allows the tires to regain their hold.