You are here :Home Jeep Adventure King of the Mountain

The journey thus far had brought a number of challenges to Matthias and the Extrem Events expedition team. However, on March 11 the team had reached the elevation of the old high-altitude world record and every continued push towards the plateau of Ojos del Salado would be a new record in the making. Naturally, the task would continue to prove relentless. As the team reached just over 20,000 feet, they encountered a sloping sea of water and ice that had been created from glacial runoff that was nearly 4.5 feet deep and over 300 feet in length. 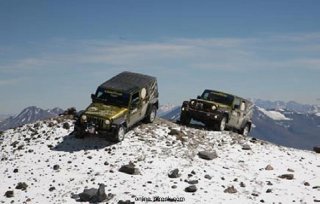 At this point, the team felt it prudent to setup winch line anchors while crossing the ‘sea’ as a safety measure to keep the vehicles from being lost in the event of ice breakage or strong drifts. The rst vehicle, ‘F1’, made it across this frozen sea unscathed however the second vehicle,  ‘F2’, began to drift before the ‘F1’ Rubicon managed to drive forward and help the second Rubicon ‘skid’ from the frozen surface to the shore. Ironically, once ashore, the vehicles electronic control switched to ‘emergency mode’ due to the documented shortage of oxygen and then shut-off. Matthias must have had good karma on his side, though, as a short pep talk to his vehicle lead to its restarting without a problem. Full performance was back on track and as the day drew to a close, both vehicles had reached an elevation of 20,500 feet, an historical milestone for two standard transmission vehicles.

On March 12, the team decided that a rest day was in order considering the enormous amount of physical and mental stress that this undertaking had entailed. The idea would prove to be a good decision as each team member was able to relax and rest before the ‘summit push’ the following day. A note of concern did hit the team that day as cloud coverage had begun to form over the Ojos, but in the end, the mountain would be kind to its visitors. 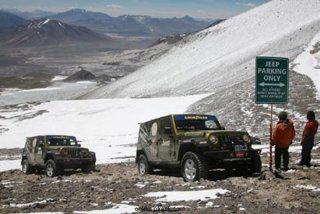 After a day of rest and relaxation, the team pushed forward through a series of rocky and glaciated terrains to eventually reach an elevation of 21,804 feet! A new Guinness World Record ™ had been achieved with one tire from each vehicle in Argentina and one tire in Chile. Said George Murphy, Chrysler Group Senior Vice President of Global Marketing, “This was exactly the challenge to separate the new Jeep Wrangler Unlimited from all other 4×4 vehicles. A climb like this in not just off-road, but extreme conditions, is a testament to the performance of the vehicle’s power train, suspension and overall quality. We are very proud that Wrangler Unlimited was the first vehicle to be able to complete such a rigorous challenge, and believe that it really does set the vehicle apart from its competition.” The world’s highest ‘parking lot’ featured two new Wrangler JK Unlimited Rubicons in their true element amongst the rocky, glaciated and windy terrain of mother Earth.