You are here :Home Jeep Adventure King of the Mountain

As Matthias Jeschke, team leader, later said, “I cannot remember to have driven an off-road vehicle before that makes such extreme rides that easy. The effect of the stabilizers is incredible; also, the power of the engine is very good.” With the knowledge that several other teams
were forming in the region to make an attempt to set a new Guinness World Record ™ as well, including a Mitsubishi-sponsored team, Matthias was excited at the prospect of answering the challenge of other teams by successfully achieving its altitude goals with two vehicles that he knew were up to the challenge.

The next day, March 9, the team began its initial push from base camp towards the plateau of the Ojos. The terrain was the most challenging that the team had seen since arriving in the mountain range, as 50 degree slopes with loose scree, drifting sand, and strong winds made the trek a tough one. On top of this, a large boulder had broken free from higher elevation and became trapped under the rear differential of one of the Rubicons which required the vehicle to be jacked up in order to dig the stone out from underneath; not exactly an easy chore when you’re at an altitude of nearly 18,000 feet. 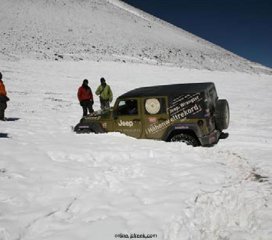 Furthermore, the rocky lane that had become the only route to the rim of the Ojos del Salado was infested with a number of large boulders that had found their way there from glacier runoff. This challenge later forced Mattias and several team members to spend a day moving boulders from the path in order to traverse the mountain in their Rubicons while other team members spent that time on acclimatization hikes. Unfortunately for one team member, the windy conditions had caused a severe problem with sand becoming lodged in his eyes and because of this, he was forced to drop from the team.

Following a busy day, the team began its ascent up the rocky lane on March 10. Matthias was the first person to ascend the rocky lane and to his amazement, his Wrangler JK Unlimited Rubicon, ‘F1’, managed to climb one of the most difficult terrains in the world using 4 low in 1st gear, activated front and rear differential lockers on, and electronic disconnects disengaged. All of this was done without any help, without extreme tire spin, and without the use of a winch.

According to Matthias, “I almost could not believe it.” His excitement continued as the vehicles pushed their way upwards to an eventual snow penitent field. With barely ten feet of width to drive through, the Rubicons inched their way through snow and sand with only 10 PSI in the Goodyear Wrangler MTR tires, something that Matthias and his team found to be remarkable. In the end, the team had reached an elevation of nearly 19,500 feet before leaving their vehicles and returning to base camp for continued acclimatization. At base camp, they enjoyed an extra hour of sleep due to the time change from summer to wintertime in Chile.