You are here :Home Jeep Adventure Discovery on the Rim

The hike on the way up was nothing short of brutal. It was hot and steep. Before the Redwall Bridge, there were large slabs of rock in the shade that I swear must have been 60 degrees or less. The sweat from my shirt, coupled with how hot I was, made for a pleasant feeling against the rock.  As we lay there, we invited other passersby to share in the “cool rock.”

It was one tough hike as we passed the Redwall Bridge and we definitely had to start utilizing our energy storage. It makes a big difference when a heavy, physical effort is towards the end of a hike and I can see why there were signs and warnings everywhere about the perils of trying to make it to the canyon floor and back in one day (28 miles roundtrip). Anyways, we had returned to the Supai Tunnel and snapped some amazing photos. We also sat down and rested at the Coconino Overlook as it was a great view.  From there we saw seven to eight layers of different types of rock. It was a memorable hike and I look forward to eventually going from rim to rim. 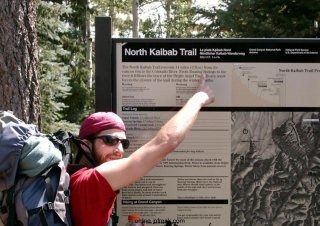 Regarding rim to rim, Becky and I found out some of the best ways to be able to complete this task. My first mistake in trying to reserve a camp ground at the canyon floor was that I had only tried one time. There are people who make reservations a year or two in advance, and most of them are flexible enough to change schedules and even make cancellations which means that had I tried again for a back country site, I probably could have gotten one. Also, our next trip to the North Rim will likely be one where we park our car at the South Rim and take the Shuttle ($70 USD and approximately three hours) to the North Rim with our extra set of clothes and camelbacks, then stay the night at the North Rim Lodge.

From there, the next day would be spent hiking to Phantom Ranch and then spending the night there. Phantom Ranch has lodges and two dormitories (one for men, one for women). You can get a hot shower, dinner, and a pack lunch for the next days’ hike out of  the canyon.  The next day we would probably spend the night at the South Rim and then go on to Zion, Bryce, Havasu Falls, etc. Phantom Ranch should denitely be booked well ahead of time. Also, rangers usually give some consideration to you when you are physically at the park begging for a spot.  They are always there to help, and I have never had an encounter where a ranger wasn’t friendly or helpful.

Worn and tired, we went back to our campsite, took a shower, and bought some beer and redwood from the General Store. The General Store has everything you need and while it’s a little pricey, it has conveniences such as gas and showers.  At 7pm we joined the crowd at the campground amphitheatre to hear a Park Ranger tell stories about coyotes. This program is the longest running of its kind in the U.S. National Park System. Our ranger, named J.H. Sprinkle, told us the type of stories (with great animation) that natives of the canyon would also have told.  All of the stories were entertaining and had their well delivered messages, such as treat all animals with respect, or never take back what you have rightfully given to another. It was refreshing and we enjoyed it very much.  From there we then downed some more liquid Tylenol (aka beer) and hit the sack after a nice, long, hard, and memorable day.