You are here :Home Jeep Adventure A Whirlwind of Adventure

The sixth stop on our round the country, whirlwind tour was much like the others in the previous month and a half on this trip…rainy! At this point we were pretty confident that we could either start a pool to make us some gas money or just bet people at the event that we could and would predict the weather, even if it went against what the local forecasters had predicted.

On Friday morning, we decided to run “The Worser Trail.” That wasn’t a grammatical error as they really did name it that. It was named after those scouting the trail were told by the landowner that “the further you go, the worser it gets” so the name stuck. The trail was muddy and had some great rock obstacles, cross axle challenges, and ravines that had to be negotiated to get to climbs with boulders, roots, and mud to add to the challenge and keep things exciting and interesting. This trail left a few vehicles with body damage, torn sidewalls, and a few other mechanical issues; however, no one was left behind.

The folks on “The Commando Trail” were delayed by the conditions and didn’t get off the trail and back for dinner until almost 9pm but they were luckier than the folks on “Cliff Hanger.” These poor Jeepers thought they were just going out for a day of wheeling until they were on their way back after lunch, only to find that their only way out had literally been washed away. Cliff Hanger is a trail that you go halfway and stop for lunch and the only way out is back the way you came in. The mud holes became so deep from the continued rain that sink holes developed and at one point, they actually had to cut down trees to fill the void and build a crossing to get the folks out. After several other guides gave up the chance to eat dinner and headed out to assist in the rescue, burning up three winches in the process, the last Jeep was off the trail and headed back to town around 3am. When the weekend was done, the participants went away happy and had some great stories to tell their friends back home. 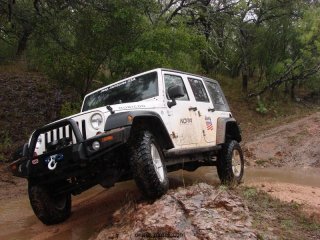 Last and final stop was Moab, Utah. Now I could fill several pages of things to see and do in Moab and for those that have never been wheeling in Moab, it should be right at the top of your bucket list with the Rubicon Trail. We went out on Poison Spider on Friday, which is one of Moab’s more popular trails with some challenging obstacles, great views, and a trail that has a story behind it. Part of the way through the trail, there is a trailside monument that has toys, trinkets, and a few other small items that were placed there by some of the folks traveling the trail. The story goes that during the pioneer days, when people were crossing the area, there was a small child that was bitten by a spider and subsequently died from the bite. The name was given to the trail and while I have no proof or know of anyone who can verify the story, it makes for a good trail story for the participants.

Hell’s Revenge was the trail we had picked for Saturday. Hells Revenge is not the toughest trail out there but it does have some good challenging ledges as well as some great scenery for those that really want to test the boundaries of their vehicles, as well as their driving capabilities. You can hit some of the very tough obstacles like Hell’s Gate, Tip Over Challenge, or any of the Hot Tubs that can test the very best drivers with the most modified rigs. Those that want even more of a challenge can take on the Escalator, which is a climb with minimal margin of error. It’s highly suggested to have a spotter if you want to try and get up the climb.