You are here :Home Jeep Adventure A Whirlwind of Adventure

The next leg of the journey was our longest stretch of road, taking us across the country to Monticello, New York for the Catskills Jeep Jamboree. We rolled into Monticello and the first thing that came to mind was that they had to have some pretty awesome wheeling because it certainly wasn’t the town or the setting that keeps people coming back. Ask the local coordinator and he’ll be the first to tell you about the gangs, shootings, robberies, and big city stories that you would expect to be coming out of the city and not a rural New York town. 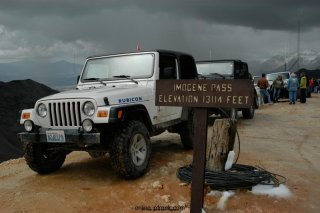 After getting the chance to get out and spend a day on the trail with the coordinator, guides, and participants we enjoyed ourselves while taking on some of the water crossings, off camber climbs that twisted and turned through the trees towards a few small rock gardens and then into a large channel of mud and muck colorfully named “The Love Canal.” With 18 vehicles in the group and no takers on being the first to tackle it, we decided to take on the challenge and put our JK to the test. The Rubicon quickly became submerged in the stagnant mud hole and began pushing mud as if the front end of the Jeep was outfitted with a snowplow. A few attempts forward and back and we made good progress until the engine died from not getting enough air due to a plugged exhaust pipe. A little bit of winching was needed to get us onto dry ground so we could get the Jeep running again and back on the trail. We finished the day on the trails and headed back for dinner and the evening’s festivities.

On the way from New York to Maine we made our way up through some of the famous coastal cities like New York City, Newport, Rhode Island, and several little harbor towns. We also made our way through Acadia National Park, a hidden treasure in its own right.

Almost everyone has seen pictures of New England in the fall, and Maine just happened to be the next stop on our tour for the 20th annual Maine Mountains Jamboree. We happened to be lucky enough to catch the colors changing at their peak and their beauty was indescribable.

Bethel, Maine is the epitome of New England from what we got to see. The small town is incredibly hospitable and they all look forward to the Jeeps and participants coming to town, even holding a parade on Saturday morning. Despite all of the rain during the event this year, the citizens were there for the parade, waving at the Jeepers. One of the special treats for the participants this year was that Mark and Irene Smith showed up for the event and were available for the people to meet them and get some autographs.

After Maine it was off to Indiana for the 20th annual French Lick event. By this time we had a reputation and people knew that by the time we showed up there was sure to be rain since all of the previous events had been plagued by rain. True to our reputation we brought flash flooding to Indiana for the weekend, throwing a complete kink in the plan the local coordinator and guides had set for the participants and their weekend. With all of the running water on the trails and mud, there were several bent tie rods, broken axles, body damage, and missing fender flares by lunchtime on the first day. By Sunday morning, the sun was out once again and we were on our way to Williamsburg, Kentucky.