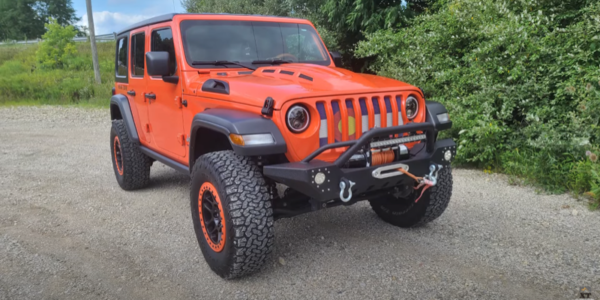 Jeep authority ExtremeTerrain (XT) unveiled another video in their ongoing “Customer Builds” YouTube series. The new episode shines a spotlight on a trail-ready 2018 Jeep Wrangler JLU with a 2-inch lift and 35-inch tires. Hosted by XT’s Merideth Evasew, the virtual interview delivers ideas and inspiration in a format that’s relaxed and informative. Jeep owners and enthusiasts can head to XT’s website for a complete rundown of all the parts used in this build, additional images, and access to XT’s Jeep parts learning center.

This clean and simple JLU is owned by Devon Cacy from Michigan. Originally from Colorado, Devon named his build “Orange Crush” after the Denver Broncos’ 70’s defense known for terrorizing their opponents. Devon regularly tears up the trails in his Jeep but also uses it as his daily driver. The discussion begins with his Mopar 2-Inch Lift Kit with Fox Shocks before moving on to a number of appearance and performance upgrades. Key mods include a mid-width front bumper with LED light bar and fog lights, a 9,500 lb. winch, a third brake light ring, and a heat dispersion vented hood.  A cold air intake and axle-back exhaust improve performance and efficiency. Meredith wraps up the video with a chat about Devon’s plans to add rock sliders, fender flares, and more.

XT’s customer builds pages provide endless inspiration from fellow Jeep owners and enthusiasts across the Country. For more information on Devon’s build, including a full breakdown of his mods list, viewers can head to his dedicated build page at extremeterrain.com. XT’s “Customer Builds” video series is a popular go-to resource. Customers can subscribe to their YouTube channel to be notified when a new video is released.