You are here :Home Featured 5 Reasons Not to Worry About the Chinese Jeep Buyout 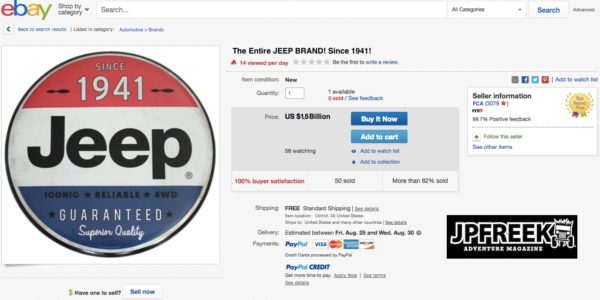 Run! The Chinese are coming! The sky is falling! Share the story across all your social media accounts! Enrage all your Jeep friends!

While it’s no secret that Jeep is the jewel in the FCA crown and there have been rumors floating around about potential buyers for a number of years, there’s a few things that will make buying the Jeep brand alone very difficult — particularly in the case of this Great Wall news.

1) Jeep is Intertwined in FCA, its Manufacturing Plants and its Dealer Network

Your local Jeep, RAM, Dodge, Chrysler dealer would have a little something to say about losing the best line of vehicles they sell. FCA would have to extricate Jeep from the dealer agreements that they have in place before any sale of the brand could occur. Is it impossible? No, of course not, but it’s not a small undertaking and the dealer network would not be easy to keep happy if they tried.

Similarly, think about manufacturing where there are plants that handle both Jeep and other FCA brands — like the one set to produce the upcoming Jeep truck and the RAM. The UAW just might have something to say about any Jeep sale and we’ve seen the big hammer that the UAW can swing in action before. 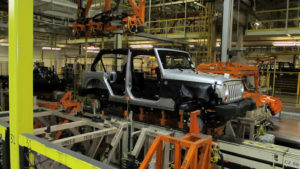 FCA would have to extricate Jeep from its manufacturing and dealer networks – Photo credit: Jeep

Automotive News cited some stats on Great Wall, one of which is that they’re only the seventh largest Chinese automaker. This smacks of a little guy (actually, the president is a female) trying to make some noise in a crowded market to get media attention. Sure did work well, didn’t it? Had you heard of Great Wall Motor Co. before this?

3) Have you seen all of the Great Wall vehicles being sold in the US? No?

Of course you haven’t.

Following on point #2, Great Wall’s president said back in 2008 that they’d be selling vehicles in the US by 2013. Seen any of those Chinese Great Wall cars motoring around your town? Any Great Wall dealerships?

Forget Great Wall or any other buyer, a split-off Jeep was just valued HIGHER than all of FCA by a Morgan Stanley analyst. From the Automotive News piece:

“Last week, Morgan Stanley analyst Adam Jonas attempted to pin a hard value on the brand. He said Jeep, as it stands, is worth the equivalent of about $17.20 per share, and that FCA, including Jeep, was worth about $16.40 a share. At those estimates, Jonas put a value of $33.5 billion on Jeep compared with a value of $32 billion for all of FCA.”

What’s FCA going to make their money on if Jeep’s spun off? We think that selling Jeep would have to be part of a complete sell-off by FCA where they had buyers for all the different brands locked-in before Jeep would be sold. Again, far from impossible and Marchionne himself has said that FCA would consider selling off Jeep separately, but who wants the rest of the dregs if Jeep goes?

RAM and Dodge might be interesting, but the rest, at a minimum, would require serious overhauls, to our thinking. Think about it, including the other brands in FCA sucks down the value of FCA by 80 cents a share! By definition, anyone taking the rest of FCA without Jeep is getting, you guessed it… suck.

If FCA is really going to consider selling off Jeep separately, don’t you think it would behoove them to shop it around beyond one Chinese automaker? (Ooooh, put it on eBay! That would be fun to watch!) 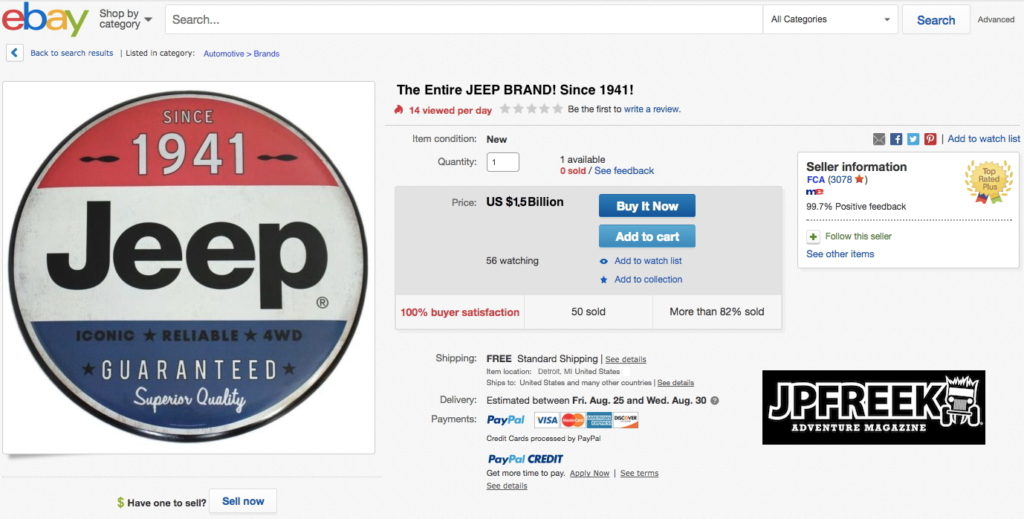 GM has already been mentioned multiple times as a potential buyer and Ford would have to look hard at it as well, just from the standpoint of not wanting GM to snag it. In a bidding war between the seventh largest automaker in China, Ford, GM, probably Indian Tata Group and Mahindra, VW and undoubtedly others (probably other Chinese groups as well), we won’t count out Jeep staying in the US just yet.

Maybe Great Wall will make us eat this post, but we wouldn’t give them very good odds right now. It is a global marketplace anymore and heck, FCA is Italian. But at least they’ve been doing right by the Jeep brand in the US investing in new plants and US job, bringing us the upcoming Jeep truck and rationalizing (and we’d argue improving) the overall Jeep lineup.

The question is, if Great Wall or some other Chinese automaker does pull this off, what will US consumers do? Let us know your thoughts in the comments.