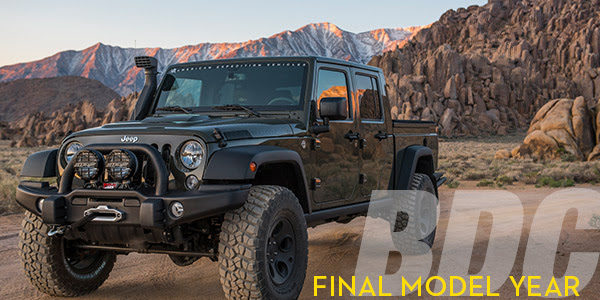 If you want in on some AEV Brute Double Cab goodness, better act fast! It’s going away with the end of the 2017 JKs. Here’s the release from AEV:

AEV’s Brute Double Cab first debuted at the 2011 SEMA Show and quickly earned the reputation as the ultimate overland adventure vehicle by combining the superior off-road capability of an AEV-equipped Wrangler with the versatility of a pickup truck – all executed with unprecedented OE-quality precision. Since then, the Double Cab has remained one of the most talked about and most desirable vehicles in the off-road industry.

However, all good things must come to an end and as with the current JK Wrangler platform, 2017 will also be the final model year for the Brute Double Cab. AEV will continue accepting new vehicle orders until March 31, 2017. AEV will continue to service existing vehicles and will continue to have crash and service parts available after production build out.