You are here :Home Featured Lion’s Back – Jeep Takes a Ride 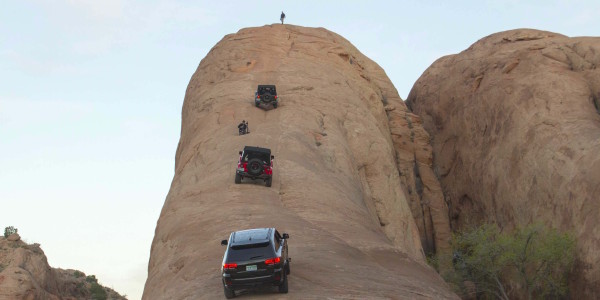 Check out this video of the a ride up one of the world’s iconic routes:

Few regions have captured the world’s attention as have the lonely expanses of Southeast Utah. If we pare that down to the region’s nucleus, we find ourselves in the red rock country of Moab. The area’s labyrinth of sandstone, sculpted by millions of years of wind, rain, and plate tectonics is a playground for recreationalists of all genres. During the last half century it has become a mecca for four-wheel drive aficionados from the world over—largely accredited to the Red Rock 4-Wheelers and the Easter Jeep Safari. They arrive by the thousands each year for an event that has become a showcase for the who’s who of the off-road world. We joined the Jeep crew in Moab for the 2016 Easter Jeep Safari to celebrate several significant anniversaries and a “last drive” on one of the area’s most notable trails.

Unless you’ve been living under a slab of slickrock, you are aware that 2016 marks the 75th anniversary of the seven-slot grill. Yes, the first Willys MB rolled off the assembly line on November 18, 1941. This little soldier’s entrance into World War II would not only help change the history of the world, but also how its inhabitants would recreate.  A quarter century later a group of Jeep enthusiasts, members of the Moab Chamber of Commerce, organized a small, one-day event on the Saturday before Easter. It was the catalyst for a five-decade tradition. If one ties in the 100th anniversary of the National Park Service, there was cause for real celebration this year.

Though the greater Moab area offers hundreds of miles of dirt two-tracks and Class 5 white-knuckle trails, only a handful have gained Holy Grail status. While these are driven on a regular basis, the most famous of the elite rests on private land and has been closed to the public for more than a decade (for liability reasons). It is not the longest, nor is it the most difficult, but this long brown fin of sandstone that resembles a lion at rest is as renowned as California’s Rubicon Trail.

It is said that the first vehicle to drive the Lion’s Back did so in 1938 as part of a geological survey for the pending nuclear age. After the war it became a Friday night party spot for Moab’s youth, and the post-war flood of surplus Willys MB provided the 4WD traction needed to traverse the precipitous sandstone with confidence. In the 1980s, it landed center stage when Tina Hastie experienced a brake failure on her Chevy Blazer and took a wild and frightening ride to the bottom, 350 feet below. Although the Internet had not been created yet, VHS tapes of Hastie’s plunge went viral. With its newfound notoriety the Lion’s Back became the subject of multiple television shows and documentaries. Although it has never been an official trail of the Safari, it was always a favorite side trip for participants.

With the aforementioned anniversaries at hand, a small group of Jeep executives got together with Michael Badger, the private landowner, and spun the idea of releasing the lion one last time. In the following morning’s pre-dawn light, a 75th Anniversary Edition Grand Cherokee and two-door Wrangler nosed up to its 45-plus degree sandstone tail; the third member of the fleet was a limited edition Wrangler Red Rock. At the steering wheels were Jeep’s Tyler Ruby, Mark Allan, and Jim Repp. (It’s great when the guys that run the company love Jeeping as much as we do). It was the first time on the Lion’s Back for the trio, and spirits were high. Ruby picked a line up the center, slipped the Grand in gear, and led the procession on a last ascent to the summit. The sun peeked over the La Sal Mountains as the team negotiated a multi-point turn at the top, casting brilliant hues over the Arches and Canyonlands National Parks and greater Moab valley. It was a glorious moment to celebrate. 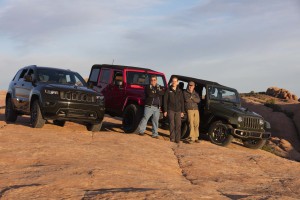 Many have asked about the future of vehicle access to Lion’s Back. What we do know is that the area surrounding this iconic trail will host a beautiful resort and conference center, and that Badger is Jeeping enthusiast. Jeep extended a special thanks to Badger for helping craft a unique and memorable day for the 50th anniversary of the Easter Jeep Safari and 75th anniversary of the seven-slot grill.