You are here :Home Featured Jeep Legal Crackdown on Trademark Use? 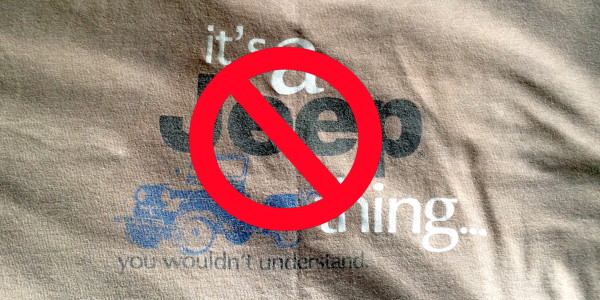 For some Jeep folks, that may be a worn-out slogan, but it’s impossible to deny the truth behind the statement.

Jeep brand lovers form one of the fiercely loyal and vocal customer bases anywhere —that’s not exactly news. Jeep evangelism is a huge part of the Jeep culture and a major reason for the brand’s insane popularity. It’s why JPFreek even exists in the first place!

What is news is that it looks like FCA may be coming after folks for putting that slogan (or any other Jeep brand mention, trademark or logo) on merchandise to sell without obtaining a license from Jeep. This after years of what could basically be called indifference to the practice.

First Shot in the Battle?

JPFreek was alerted to a massive (30,000+) product deletion yesterday on the very popular retail site Zazzle.com where FCA apparently came after sellers using some form of unlicensed Jeep trademark or logo. If you’re not familiar with Zazzle, they are a major print-on-demand supplier where sellers can build their own hosted stores using their own art and designs on a huge list of products that Zazzle makes available, prints and ships for them. 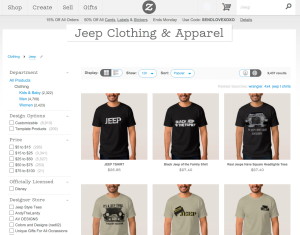 A sample of some of the clothing results from a “Jeep” search on Zazzle.com

Here’s the Zazzle explanation on the product deletion to a seller in their official email:

“Your design has been removed at the request of brand representatives from Fiat Chrysler Automobiles (FCA) due to unauthorized and unlicensed use of the Jeep® brand name, trademark, and/or related logos and slogans on commercial products.”

Here’s what a user on the site gets if they click through to one of the deleted Jeep-related products: 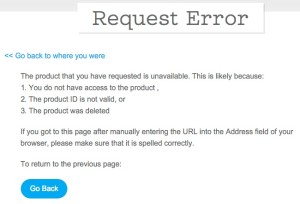 Zazzle’s “Unavailable” screen when you attempt to go to a Jeep-related product.

JPFreek reached out to Zazzle during preparation of this article and received the following, not unexpected, response from a spokesperson:

“Zazzle provides an open marketplace where user-generated content can be used to create a wide variety of products and apparel. By its very nature, the platform thrives on creativity and the opportunity for people to share their designs with the world. When a product is brought to our attention that violates our terms of service, we take swift action to remove it. We recently removed Jeep-related designs from Zazzle as these products violate our terms of service. It may take up to 48 hours for all of the products to be removed from Zazzle.”

To be 100% clear, we are not faulting either FCA/Jeep for their request to Zazzle or Zazzle’s response. But this begs a question…

Zazzle is a huge, easy target for FCA to knock out a lot of unlicensed product quickly, and FCA is perfectly within their rights to do this. But think about what this move could signal. Everyone reading this likely already has thought of a dozen different companies or sites places selling stuff like this. Is this the start of a wave of such actions?

Of course, many commercial entities have fully legit, licensed products, but for the small shops, website, Facebook pages/stores, other print-on-demand setups other than Zazzle, for whom it’s not feasible to pursue a license?

Obviously it would take a herculean effort for FCA to go after every single company or site that’s selling something without license, but as far as we are aware, it’s a fairly major policy shift to crack down on any unlicensed commercial usage.  To our knowledge, it’s been years since there’s been any significant legal push by Jeep like this.

As with any major company FCA has an army of lawyers, have they released the hounds?

What’s it All Mean?

Looking at the big picture, it’s no secret that Marchionne, CEO at FCA, has been pushing for a Jeep/General Motors merger for some time. This could be FCA starting in on its due diligence to make the Jeep brand as “clean” and attractive as possible for GM.

It’s possible that someone simply got a bee in their bonnet about the tens of thousands of products at Zazzle and that will be the end of it. However, if this is FCA starting to put the Jeep house in order “legally,” then it’s highly likely that there will be a lot of other shots fired in this battle.

JPFreek has reached out to Jeep/FCA for comment and will update this story as needed.

Interesting note: Dodge, Ram, Chrysler and Mopar branded merchandise is all still available at Zazzle.com more than 24 hours after the Jeep merchandise was deleted. It’s possible that Jeep’s legal team is just that compartmentalized, but as a part of FCA, if you’re going after an entity like Zazzle for Jeep brand licensing issues, why not also take care of the others?