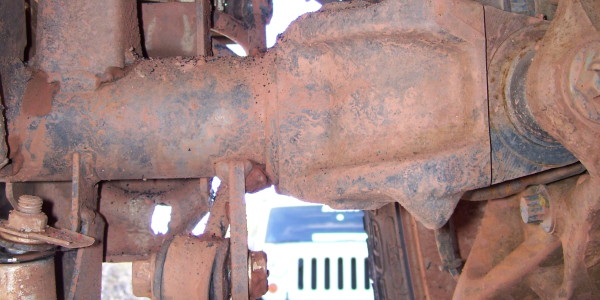 Clara was my 2009 Rubicon Unlimited, with C-gussets and lower control arm skids on her factory Dana 44 axle housing. She was wearing a 2.5” Teraflex suspension and factory BFG KM1’s at the time of the incident described here.

“Failure is instructive. The person who really thinks learns quite as much from his failures as from his successes.” ― John Dewey

But They Made Good Time…

She was on rent during Christmas week 2009 to a family from New York. I distinctly remember this family—they all wore black leather jackets, and were very tall and stout. I calculated the Jeep was carrying 1,500 pounds of people, not including any luggage.

It had snowed recently, and, though melted, the trails were wet and a little slick in spots. I was out checking trails and happened to see this family in our lovely Clara #5 started in to Soldier Pass as I was headed out. I arrived back at the office in ten minutes and, shortly after I arrived, they phoned in saying they were just finishing Soldier Pass and the Jeep was “steering funny.”  I looked at the clock and said, “Finishing? Did you do the whole trail?”

Although Soldier Pass is a short trail—less than 3 miles—our estimated drive time, even without stops, is 45 minutes, when driven in a responsible manner. In spite of our recommended “walking speed” on this particular trail, I daresay they were moving significantly faster.

“Steering funny” was not an unfamiliar term to me. The factory setup on the JK puts the steering dampener as the lowest hanging part and it often gets hit on our rentals. When they are mangled enough, they can interfere with the steering of the Jeep. I assumed that’s what we were dealing with in this situation, so I jumped in another Jeep to take out to them to swap out, figuring I would just remove the mangled dampener and drive the Jeep back to the shop to install a new one.

If only life were that simple. 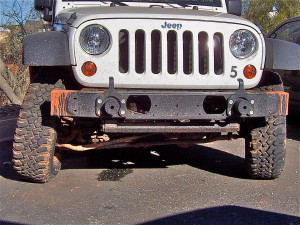 My hopes of it being a simple mangled steering dampener were dashed when I pulled up and saw this.

When I arrived to the trailhead, there was my Jeep facing me, front wheels cockeyed, as seen in the photo. “That’s not good.”

Upon further inspection, I found the front axle housing had cracked—no, splintered—between the upper control arm mount and the track bar mount on the long passenger side. Little did I know at the time, we would see this again and again in the same spot over the coming years. 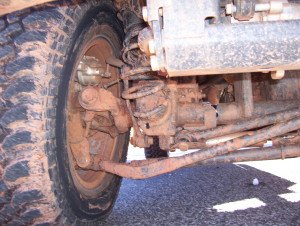 The housing snapped and the passenger end rotated 90° forward.

Not only was the axle housing broken, but the now-independent passenger wheel rotated about 90-degrees forward. This Jeep was going nowhere but on the trailer.

But That’s Not All!

The fun didn’t end there. Her dashboard was lit up with lots of pretty lights. I popped the hood open to see the broken top of the passenger front shock sticking up into the engine compartment, surrounded by lots of broken plastic. It pierced part of the fuse box and nearby wiring harnesses. It was a miracle that the Jeep ran and drove out to the trailhead. 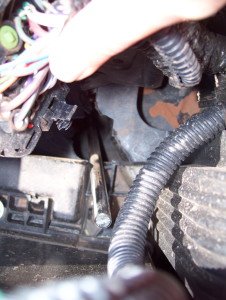 Broken shock piston rod sticking up through fuse box area in the engine compartment. (Looking down on the engine.)

Renters pay for any damages to the Jeeps, whether it’s an act of God (like a tree falls on it in the parking lot of their condo) or it’s from their momentary brain lapse on the trail (like taking the buddy’s dare to do Tipover Challenge in the snow). Their insurance paid for the repairs to the Jeep, but we always analyze everything we can to see if there is something different WE need to do on our end for future customers and Jeep builds.

In this case, my final analysis was this:

First, they were driving too fast altogether, let alone for the current conditions. 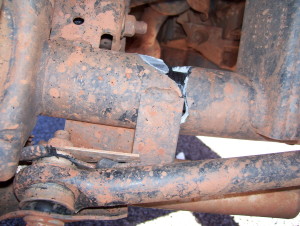 Close up of the spot where every single one of our broken axle housings has splintered—in between the upper control arm mount and the already questionable front track bar mount.

Second, when they dropped off the ledge coming down from the Devil’s Dining Room section of the trail  (where I found broken parts on the ground) they hit really hard while standing on the brakes. Standing on the brakes and sliding off the ledge meant the front wheel couldn’t rotate at all to relieve the shock load from the hard landing. The shock punched up into the engine compartment and the axle housing snapped to allow something to rotate forward. Altogether, sliding downhill, with a heavy load, brakes locked up, and an impact will break something.

If not the axle housing, then what? You can beef up the housings with inner sleeves (which we did for a while on our bigger Jeeps) or trusses (like the Artec ones we use now) or even an entire aftermarket housing or axle (like the Mopar 60’s or Teraflex or Dynatrac beefy housings).  If you do that, what is the next weak link? Over the next few years, we learned that axle U-joints and sector shafts are the next weakest links.  What would you rather break on the trail? 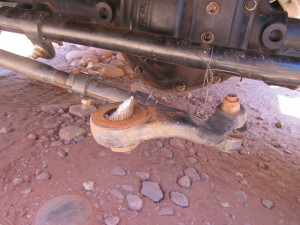 After we began sleeving axle housings, we started breaking other stuff, like axle shafts and sector shafts.

1. Know the weak point of your rig. There really is no such thing as “bomb-proof”—there is always a weakest link, and you want to intentionally design your rig so that weak link is the cheapest and easiest thing to replace on the trail.

2. Drive better. It really can be that simple.

Nena is a world-renowned trail guide and recovery expert (you can see why from this story!) and owns Barlow Adventures, which rents Jeeps in Sedona, AZ and Moab, UT. Barlow Adventures also provides guided trips over the Rubicon. Nena is the only woman certified by the International 4WD Trainers Association.

Contributing Editor & Founder of Sedona Jeep School: Nena Barlow grew up in the Southwest, exploring the back roads by Jeep, horse, and hiking boots. She has been in the Sedona Jeep tour business since 1996, leading people from around the world into the back country of Sedona by four-wheel drive, organizing special 4x4 events, and training professional guides in proper 4x4 technique, off-road and trail safety, and four-wheeling etiquette. Nena has logged thousands of hours in the back country behind the wheel of a Jeep, with additional off-road experience in Hummers, Unimogs, Fords, Toyotas, and Nissans. She says, “The most important thing about four-wheeling is to not let your ego dictate your course of action. It is fun to push to the edge of your comfort level, but the best four-wheelers take the easy route rather than push beyond their capabilities or the capability of their vehicles. Know yourself and your vehicle, and be brave enough to say I am not going any further than this today.” Nena spends most of her days outdoors, whether for work or play.