This morning Chrysler and MOPAR released the details of the 2013 Easter Jeep Safari concept vehicles. With EJS starting next week, we are even more excited to get out to Utah and see these Jeeps in person. See the press release and pictures below!

March 20, 2013 , Auburn Hills, Mich. – Jeep® and Mopar will be showcasing a range of extremes at this year’s annual Easter Jeep Safari in Moab, Utah. Now in its 47th year and taking place March 23-31, the Easter Jeep Safari will be attended by thousands of die-hard off-road enthusiasts looking to enjoy a week of wheeling on some of the country’s most famous and challenging trails.“Off-road enthusiasts will be pleasantly surprised by the range of Jeep models we’re bringing to this year’s Easter Jeep Safari,” said Mike Manley, President and CEO – Jeep Brand, Chrysler Group LLC. “We go to this extremely popular event in Moab each year to showcase the latest production vehicles from Jeep, as well as a host of new customization and personalization ideas. In doing so, we connect with and receive a tremendous amount of feedback from our most loyal customers.”Jeep and Mopar sprinkled production and prototype Jeep Performance Parts on this year’s collection of concept vehicles. Jeep Performance Parts are specifically designed, built and quality-tested to meet strict Jeep specifications, 4×4 capability, craftsmanship and versatility to help transform stock rides into even more capable trail performers.

“We created our new Jeep Performance Parts portfolio for extreme off-road Jeep fanatics,” said Pietro Gorlier, President and CEO of Mopar, Chrysler Group LLC’s service, parts and customer-care brand. “Jeep owners who are passionate about customization, performance and personalization will have a long menu of Jeep Performance Parts from which to choose.”

Since 2002, Jeep and Mopar have teamed to create nearly 40 unique concept vehicles for enthusiasts who attend the popular Easter Jeep Safari. 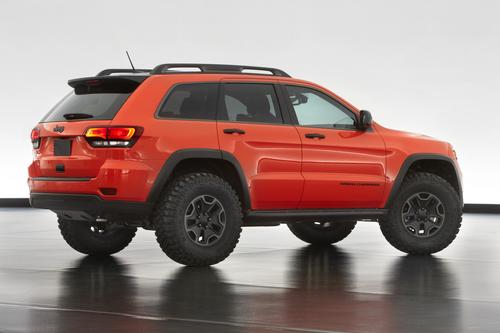 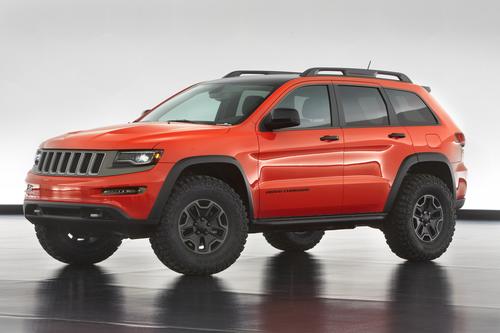 Custom design cues include a Grand Cherokee SRT hood, SRT front and rear fascias that have been modified for extra ground clearance, a black front grille, a matte black roof and one-off custom roof rails. The body is finished in a vibrant, non-metallic blood-orange hue that also manages to draw attention to the larger wheel openings and off-road tires. 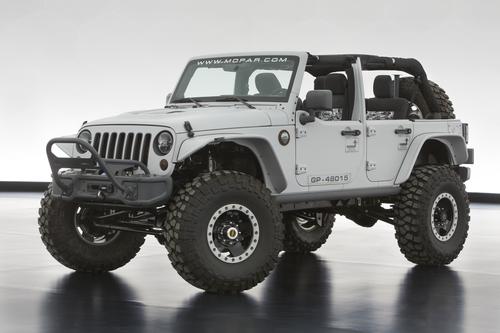 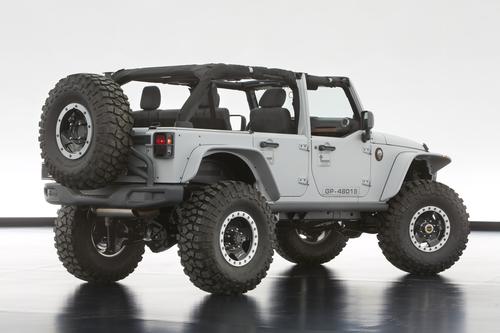 The Jeep Wrangler Mopar Recon features a gray exterior and a little extra firepower with a 6.4-liter HEMI V-8 crate engine from Mopar. The 470 horsepower engine is mated to a five-speed automatic transmission and Dana 60 front and rear axles with 4.10 gearing. The axles are suspended by a 4.5-inch prototype long-arm lift kit and roll on Jeep Performance Parts prototype forged eight-lug beadlock wheels with 39-inch off-road tires. 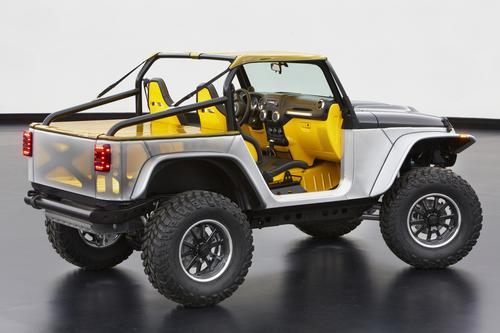 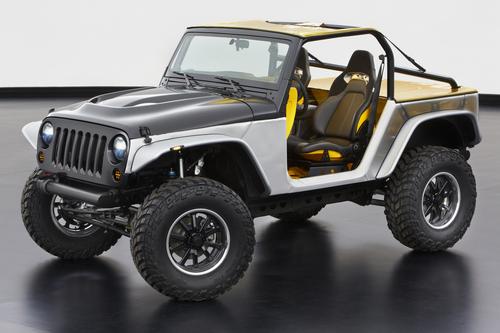 One of the past Easter Jeep Safari concepts still loved today by enthusiasts is the light weight Pork Chop. For this year’s Safari, Jeep has created its first follow-up vehicle with the new Jeep Wrangler Stitch. Based on the 2013 Wrangler Rubicon, the Stitch has been lightened to a parse 3,000-lb. curb weight, giving it a power-to-weight ratio similar to that of the Jeep Grand Cherokee SRT.

Jeep designers shaved weight where ever possible: the frame, axles, body and interior. The audio system and all heating and air conditioning components have been removed. The front seats are taken from the new 2013 SRT Viper and the rear seats have been removed. Sections of the body have been cut out, the doors have been removed, and the hood is a custom carbon fiber version of the one found on the Jeep Wrangler 10th Anniversary Rubicon. The standard roll cage has been replaced with a chrome moly unit, and the Full-Traction lower control arms, floor pan and GenRight fuel tank are made of aluminum. Even the frame and axles were modified to remove weight.

Unique design details include a windshield that has been chopped two inches, a clear yellow vinyl soft top, black leather SRT Viper seats and center console with a yellow instrument panel and seat backs, Truck-Lite LED headlamps and the previously mentioned carbon fiber hood. The black body panels are wrapped in a unique, see-through silver architectural fabric that hides the cut panels at some angles, and makes them visible at others. 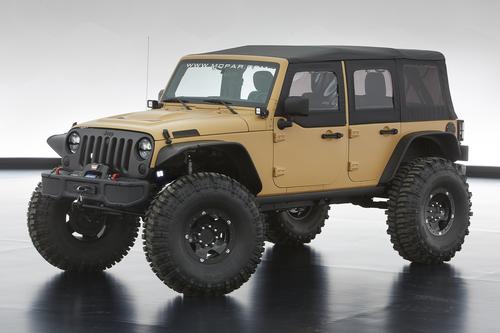 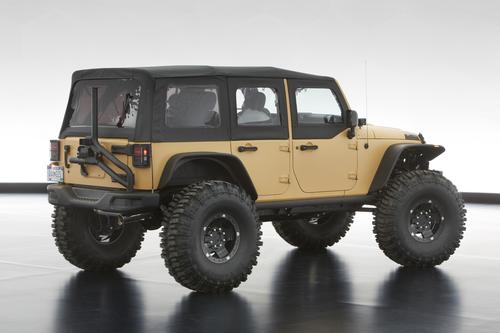 After the popular Sand Trooper made its debut at SEMA in 2012, Mopar upped the ante with the Sand Trooper II to get it ready to take on Moab. The Sand Trooper II features a legendary 5.7-liter HEMI V-8 to give it 375 horsepower and 400 ft.-lb. of torque. A five-speed automatic transmission sends the HEMI power to Mopar eight-lug front and rear Portal axles for added ground clearance. Jeep Performance Parts prototype forged beadlock wheels carry 40-inch off-road tires, giving Sand Trooper II its menacing stance. 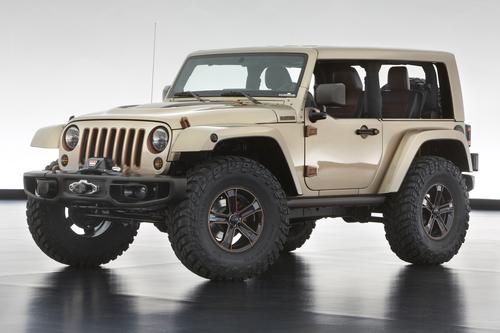 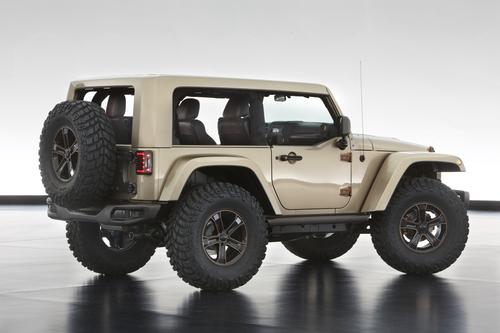 The Jeep Wrangler Flattop is a paradox of sorts. Its highly styled and refined body and interior completely belies its phenomenal off-road capability. Jeep designers took special care to give the Wrangler Flattop an upscale appearance inside and out, but bolted some of the most hard-core off-road gear available to Flattop’s chassis.

Featuring a custom one-piece, windowless hard top, the body is finished in a metallic sandstone with copper and brown accents. The top and windshield were chopped two inches, and the b-pillar was removed creating a massive opening from front to rear. The door and hood hinges, tow hooks, grille slats and headlamp surrounds are finished in a copper tone, and the bumpers, side rails, side mirrors and hood decal are dark brown. The bumpers are customized versions from the Wrangle Rubicon 10th Anniversary model, as is the hood. Custom high line fender flares, Truck-Lite LED headlamps, LED rear taillamps and side markers, a massive Warn Zeon winch and TeraFlex spare tire carrier round off the exterior enhancements. 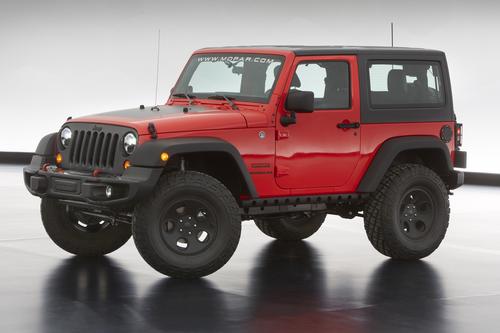 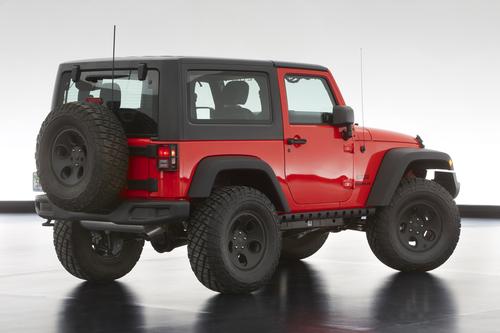 The black interior features leather seat covers and a CB radio, as well as Mopar all-weather slush mats and a hard-top headliner.

Built on more than 70 years of legendary heritage, Jeep is the authentic SUV brand with class-leading capability, craftsmanship and versatility for people who seek extraordinary journeys. The Jeep brand delivers an open invitation to live life to the fullest by offering a full line of vehicles that continue to provide owners with a sense of security to handle any journey with confidence.The Jeep vehicle lineup includes Compass, Grand Cherokee, Patriot, Wrangler and Wrangler Unlimited. To meet consumer demand around the world, all Jeep models are sold outside North America – and all are available in right-hand drive versions and with gasoline and diesel powertrain options. Chrysler Group LLC sells and services vehicles in approximately 130 countries around the world.

Mopar parts are unique in that they are engineered with the same teams that create factory-authorized vehicle specifications for Chrysler Group and Fiat S.p.A.vehicles — a direct connection that no other aftermarket parts company can provide. A complete list of Mopar accessories and performance parts is available at www.mopar.com.