You are here :Home Jeep Adventure Overlanding the French Alps

After a short chat we began our descent to the two lakes we had seen from above. There we met a group of 200 Land-Rover owners which were on an organized trip to another mountain nearby. After returning to the camp ground we celebrated our victory and went to bed.

The next morning saw us on the way to France. Over the Col de Petit St.Bernhard we reached the Isere Valley and started our ascent to the Col d’Iseran (9.350 ft) and the Mt Cenis Lake. Above the sea we drove to the Turra fortification where a yet unfound geocache was located. But even after an hour of searching it didn’t reveal itself so we descended back to the lake, took some photos at the large dam, and went to the Col de Sommeiller where we reached the 10.007 ft. high pass in total darkness. This was no real problem due to our HID lights. The night was cold, and in the morning it was only 10° F. But we had a great sunset and took some marvelous pictures while finding two more geocaches in the area. 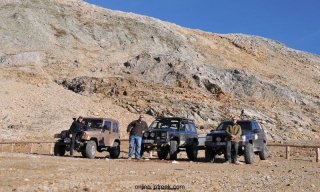 After crossing the Col de Echelle we reached the French town of Briancon, filled up our gas tanks, found another geocache in the towns’ fortification, and started our way home to Germany. We followed the route of the “Tour de France” bike race, crossed the 8.685 ft. high Col de Gallibier, did some more geocaches, and arrived at home in the night.

It was a great trip and will no doubt be a catalyst for a future overland excursion in the future.

Contributing Editor & European Jeep Correspondent: Jan lives for adventure. Whether he's out in his Jeep or traveling by foot, you can bet that Jan is enjoying the Jeep lifestyle to its fullest with travels all through the French, Spanish, and Swiss Alps and throughout eastern/western Europe.