You are here :Home Jeep Adventure Overland Adventure to the Scottish Highlands

The road from Ben Lawers connects via Bridge of Balgie to the town Aberfeldy, where the Dewars distillery can be found. A first stop for a whisky souvenir J.

Famous for its distillery but also for having flying boat squadrons in the early years of World War II, Oban was a must-visit city on our list. The road from Crianlarich to Oban turns and bends between the hills, and sudden bursts of sun erupting between the clouds promised a lot for a great day. Oban itself was a surprise to us. A rather small and cozy town, draped around a small bay with some fishing ships. We visited the Oban distillery shop and were welcomed by a very kind man who was very happy to stamp my whiskey collectors bible. We had lunch at the Mac Tavish Cavern where I had, of course, a dish of Tatties and Neeps, being mashed potatoes and mashed turnips, accompanied with a great portion of haggis. Haggis is traditionally made from sheep intestines, cooked in a sheep’s stomach, but is also easily found in pubs as a snack or lunch. The Haggis ingredients and its cooking ways sound a bit weird, but the taste is just so very nice! 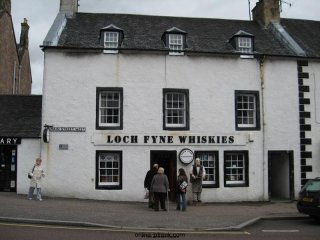 After our visit to Oban, we took a special scenic drive through Hell’s Glen and then up to Inveraray near Loch Fyne. The Hell’s Glen is a narrow and now almost abandoned track through the hills, and a pleasure to drive! Inveraray is the town next to the Loch Fyne, and home to an ancient prison museum, and also to the Loch Fyne Whiskies company, who employs the principle of a living cask in the style of a Spanish whiskey solera: “When (the cask is) half drawn down, a new malt is introduced and the character changes.” A great concept, with a great shop, and a fantastic value for money whiskey!

Contributing Editor & International Jeep Correspondent: Hendrik has been a proud member of the JPFreek team since 2008 and is an active member of Jeep Club - Belgium. Hendrik's travels have taken him throughout all of eastern/western Europe, as well as the arctic circle and other amazing destinations. Hendrik and his family enjoy the Jeeping lifestyle and reside in Belgium.